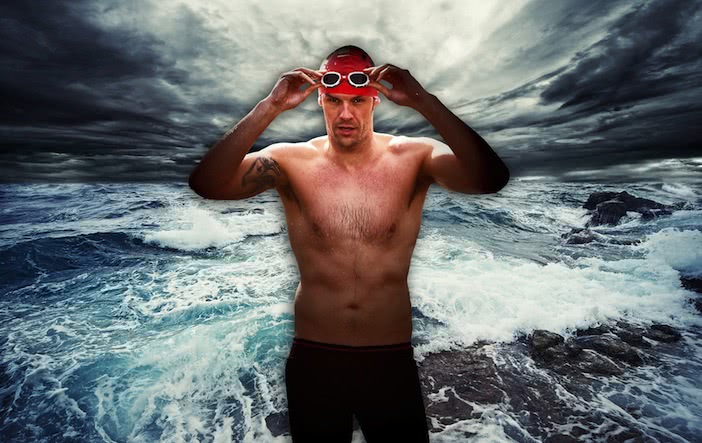 Adam Walker’s life changed after watching a a fictional movie on a plane about a man swimming the English channel.  He decided to take on the challenge himself, though he had not been swimming for 10 years. At the time Adam was feeling low with his life and wanted to test himself.

He has completing a global challenge of swimming the hardest 7 oceans in the world called the ‘Oceans 7.’ In 2014 he completed the 7th swim becoming the first British person to do so. Adam is also the UK’s leading open water swimmer in a sport that is growing faster than any other.

Adam’s Oceans 7 story is an inspirational keynote on his pursuit of achievement, including his motivations, the planning involved and the many challenges he faced and overcame. He has been chased by sharks and saved by dolphins, stung by the the almost instantly deadly Portuguese Man O War jellyfish and losing feeling in his spine and much more.

The interest in Adam and his Ocean’s 7 challenge is immense. His swim across the notorious Cook Straits  received 4.3 million hits in less than 2 weeks on YouTube.

With a stunning visual presentation that uses content from his Oceans 7 challenge, Adam’s story is truly global and relevant to audiences seeking inspiration. Adam’s talk is appealing as he conveys that he is just like anybody else with a full time job. He wasn’t born an Olympic swimmer and has had to balance his day job and train on top in order to fulfil his dreams.

Adam talks about the importance of team work, with his life on these swims in the hands of his support teams as they watch him from the support boat scanning the sea for sharks, whales and jelly fish. He has been interviewed all over the world on the major networks and gives regular motivational talks via Skype to children of all ages in the USA, Canada, France, Egypt and the UK.

Adam when not public speaking pursues his passion of coaching people both in and out of the water.

Adam Walker "Deservedly Adam Walker has a huge following and he encourages people to take on new challenges in any aspect of life"We say...
5 / 5