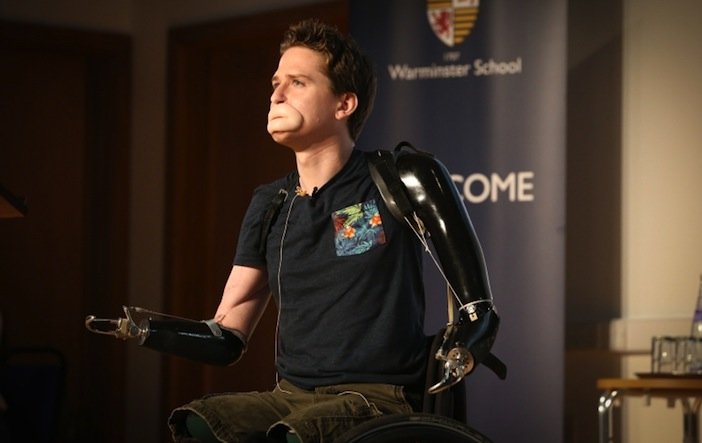 In November 2013 Alex Lewis collapsed and was rushed to Winchester Hospital’s Intensive Care Unit. He was 33 years old with a partner and son of 3 years old. His only symptom leading up to this was the common cold and a sore throat. Within a few hours of his collapse, his vital organs were being supported mechanically, his blood forced around his body with nora adrenalin. His chances of survival given by the consultants for the first 3 days was less than 3%. He had contracted Strep A Toxic Shock Syndrome, Septicaemia and Necrotising Fasciitis. The immediate required action by doctors and surgeons was a quadruple amputation and extensive skin grafts and facial reconstruction as the infection ravaged his face and mouth as well as his limbs.

Alex  spent the next twelve months in hospital with many more ahead for extensive surgery and ongoing rehabilitation to learn to walk again.

A trust was setup to help fund Alex’s rehabilitation costs including wheelchairs, home adjustments, and prosthetics. Myo-electric, microprocessor and muscle intuitive prosthetics which are necessary for Alex to return to as near normal life as possible.

Alex Lewis is creating headlines across UK media in 2016 as his story begins to be told in print and on various interviews on national television shows, such as ‘This Morning’ on ITV.

This documentary is well titled: what initially appears to be a run-of the mill example of a generic documentary about extraordinary medical misfortune and the resulting need for heroism develops into the story of a man who was already in a bad place in his life before he lost part of his face and four limbs as a consequence of toxic-shock syndrome.

The director, Leonardo Machado spent two years with the Alex Lewis family creating an emotionally tough film that does not shy away from the harshness of Alex’s battle with adversity and the effects it had on his young son Sam and family.

Through Alex’s “A Minor Setback” motivational talks he shows in a humorous and lighthearted fashion that a positive approach to life paves the way to a fulfilling life. That dealing with change and turning obstacles into opportunities can make anything possible. Appreciating what you have by accepting the things you can’t change and changing the things you can. Making a reality check on your priorities but never giving up on your dreams.

Alex has been asked to speak at a variety of events, from Fundraising Events, Corporate Dinners, School Awards Presentations and Medical Conventions.

If you would like Alex to make an inspirational speech at your event please do not hesitate to contact PROMOTIVATE Speakers Agency in London on +44 2078711829.

Alex Lewis "Dear Alex, on behalf of Medtronic, I would like extend our thanks for taking part in Medtronic LIVE and sharing your moving story with the company. Your talk was laid bare, shocking, emotional and inspirational to everyone in that room. I’m not sure there are many of my colleagues who would accept the challenge of a tandem parachute jump or the kayaking with such a fearless attitude. I have done a parachute jump and believe me, I was FAR from fearless when it came to leaping out of that plane. Everyone in that room was both motivated and humbled by what you and your family have been through. It was a pleasure to meet you and we wish you all the best for the future." Rebecca Mancini, OrganiserMedtronic July 2016
5 / 5
Alex Lewis 'It has been my privilege to know Alex Lewis for the past 8 years. When I first met Alex he was a hard working industrious family man, who has spent all of his free time caring for his young son Sam. All that changed dramatically when what was deemed to be a common cold, morphed into Strep A Infection, Blood poisoning and Toxic Shock Syndrome. 99% of human beings would not have endured the rampant infection of a flesh eating bug, and in fact Alex was only given a 3% survival chance. However, through unbelievable determination he has overcome the most unimaginable adversary circumstances, to rebuild his and his family’s life. Alex is more interested in the promotion and help of other’s (if that can be believed) than himself. He is a truly inspirational individual. Every time upon meeting Alex, (and before you get the opportunity to ask how he is, and how is rehabilitation is going), he has bombarded you with questions on how your own family are, and how your business is coping with the economic down turn. This is just a typical example of Alex’s positivity on almost every aspect of life. At any of the events that I have attended with Alex, his positivity has lit up the room. Alex’s motivational talks are a shining example to all of us that there are people much worse off than ourselves, facing day to day struggles, and of which the vast majority of people would have given up a long time ago. It is very hard to track Alex’s progress. One of the early questions I had for him was “when will we be able to have a pint together” (Alex being able to drink from a normal glass). The next time I met him he was training for a marathon kayak adventure that I myself would not wish to undertake. His positivity in the face of shear adversary, benefits all who meet him, and TSI will be utilising his services in the future to demonstrate what can be achieved with such a strong motivational attitude to life.'Duncan McCulloch MD, TSI
5 / 5