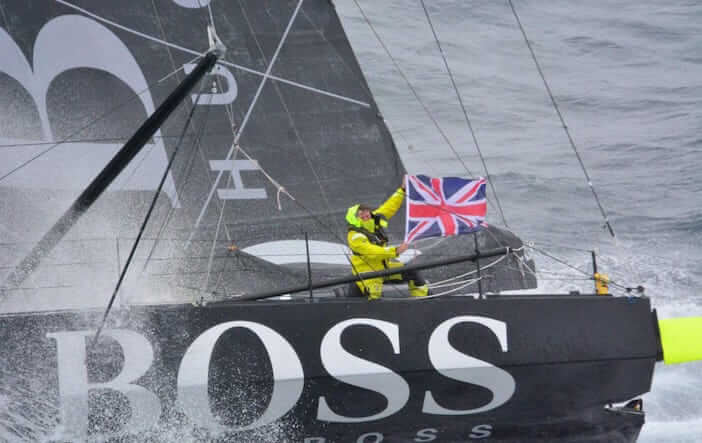 Throughout his decorated career to date, British skipper Alex Thomson has broken multiple records, achieved countless accolades and continued to cement his reputation as one of the world’s most talented offshore sailors.

The youngest skipper ever to win a round-the-world yacht race, Thomson also holds the British solo, unassisted round-the-world monohull record, which he set in 2017 when he finished the gruelling Vendée Globe –‘the Everest of sailing’ – in just 74 days, 19 hours, 35 minutes.

Aged just 25 he was the youngest skipper to win an around the world race. In 2013 Alex came third in the Vendee Globe. This is a gruelling single-handed, non-stop, unassisted race around the world covering 26,000 nautical miles in his round-the-world journey alone. Having come 3rd in 2013 Alex was determined he could win in Hugo Boss in the 2016/17 version.

Having started well in the 2016/17 Vendee Globe Alex’s starboard foil which is used to stablise the boat on one side broke on the 14th day of what would turn out to be a 74 day race to the finish. Despite the setback Alex learned to sail using his port side foil despite at times being up to 200 miles behind his main competitor reduced this to just 30 miles in a close finish 2nd behind Frances Armel Le Cleac’h.  On the way Alex had broken the world record for the most nautical miles sailed in 24 hours at 536.81nm. Such was the media attention on the race that a BBC video taken from a helicopter of Alex racing mid-race in the South Ocean received over 6 million views!

But Alex is more than a sailor. He is daring doing stunts wearing Hugo Boss apparel. The most recent is one where he skywalked. His latest stunt had him, dressed in a BOSS suit, on a kiteboard and attached to his yacht, allowing the boat’s speed to lift him to a height of 280ft into the air before detaching. From there, he did a controlled descent, landing the kiteboard back on the water.

A natural communicator, the sportsman uses his own experiences of racing solo, without assistance around the world to motivate, inspire and engage audiences. Thomson shares astonishing tales and fascinating anecdotes from his career both on and off the water, together with the valuable life lessons he has learned along the way.

To book or enquire about having Alex Thomson speak at an event contact Promotivate Speakers Agency on +44 (0)2078711829.

Alex Thomson "Although I’d love to have won I have to be happy with second place given my technical issues, and to have broken some records along the way, including a new 24hr distance record of 536.81nm. Armel sailed an incredible race, though, and after coming second twice he deserved this win. He and his team have done a wonderful job and I’m very happy for them. People tend to think of sailing as an individual sport – especially in a solo race like this – but it really is all about the team, and I owe this result to my team who worked so hard both before and throughout the race. With luck it will be my turn next time. The fire still burns!"Alex Thomson on coming 2nd - Vendee Globe 2017
5 / 5