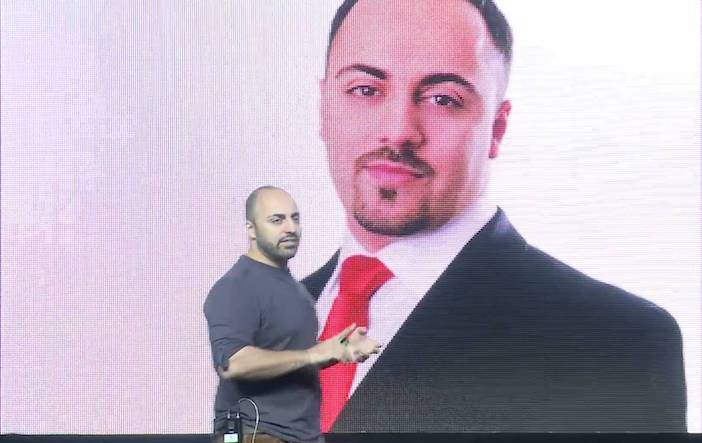 Ali Mahlodji has an amazing story. Despite a speech impediment and growing up in Vienna, Austria, as an Iranian refugee, Ali Mahlodji has overcome many challenges. Today, he is the CEO of internationally aclaimed startup WHATCHADO and has a staff of 49 employees and motivates organisations world-wide.

Feeling like a stranger in his new environment, Ali often wished he had a mentor. This led to his business idea, i.e. WHATCHADO, where life stories are taken and used so that others can find what he terms ‘a soul mate’.

The refugee and school dropout believed himself an ‘error in the system’, although it did not influence his self-perception. His over forty jobs undertook includes that of ‘cleaning lady’, manager, teacher, and founder and CEO as well as Chief Storyteller at WHATCHADO.

Ali has, during his life, suffered burnout and faced issues that most could not even contemplate. His main task, Ali believes, is to save the world, and he is serious about it. Everyone, according to Ali, should start small, with one person, thereby already saving one small piece.

His company, WHATCHADO, has interviewed thousands of people across the globe, taking down their stories, letting people speak about their lives and careers. These people are not necessarily all business people or superstars. Many are average people building a life on average, and at times less than average, circumstances. His project has collected thousands of life stories from more than 100 countries and is a source of inspiration for millions of people.

Ali, through his work, has gathered a number of achievements. Amongst these are included:

The child with problems earned a Bachelor of Science in engineering ( the University of Applied Science in Vienna) and a diploma from the Austria College for IT/Business Administration, and has, despite his busy schedule, found the time to write a book. Empowerment in management. Challenges of Employee Motivation deals with the challenges faced by management to empower their employees to solve problems faster, react more effectively, and think more sustainably.

Ali is of the opinion everyone has a story, and each person’s story can inspire change.

“Nobody knows what the world looks like in ten years. We just have to get involved in the chances of change and let ourselves be surprised a bit. ” – Ali Mahlodji

The child ridiculed because of his stutter is a far cry from the eloquent man that takes the stage, addressing audiences on a global scale, and counting hundreds of businesses as clients. His unique approach to Human Resources and an innovative approach to business, leads one to ask the question: should employees have coaches rather than bosses?

Ali Mahlodji "At the age of 12, he stuttered and was unable to say one straight sentence without tremendous effort. That made him a welcome victim for his classmates. Behind his back they mumbled: "He can not even talk." The sentence accompanied him through his youth . Today, he is CEO of a company with 49 employees and is everything but speechless when he is on stage throughout the world . At times also in his leather pants, after all, he grew up in Vienna."Katharina Schlangenotto
5 / 5
Ali Mahlodji "Nobody knows what the world looks like in ten years. We just have to get involved in the chances of change, and let ourselves be surprised a bit. " Ali Mahlodji
5 / 5