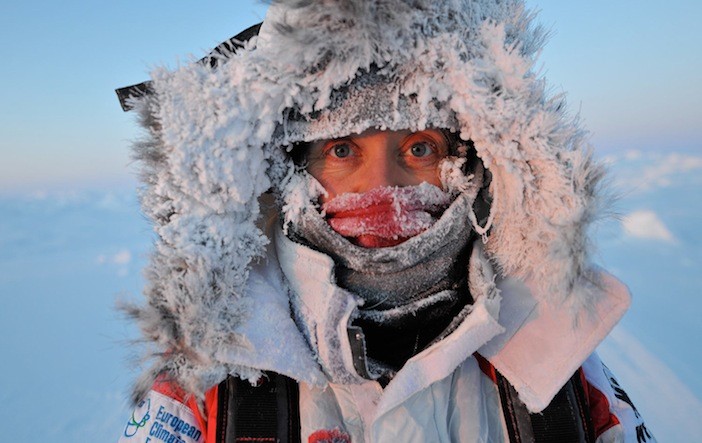 Ann Daniels is a record-breaking polar explorer and a renowned international speaker. Daniels is the first woman in history, along with expedition teammate Caroline Hamilton, to reach the North and South Poles. Aged 30 Ann was a mother of triplets and working at the Natwest Bank and had never had a rucksack on her back. She has turned ordinary into extraordinary.

In 2009, Ann was asked by Pen Hadow to be his head of ice operations for the ground-breaking Catlin Arctic Survey. This project completed a unique environmental study of the rapidly disappearing frozen Arctic Ocean. Ann was responsible for leading the team on the ice and finding a safe route, making difficult decisions in the most extreme environment on Earth for 74 consecutive days.

Described by the Times as “living proof that humans really can reach new peaks”, Ann’s initial experience of the polar world was as a key member of a relay expedition to the North Pole in 1997. She was selected from hundreds of applicants to join the first team, which was tasked with crossing the toughest sections of ice in the coldest weather that any of the five relay groups experienced. Fired up by her experiences in temperatures cold enough to freeze skin instantly, Ann and four colleagues from the relay went on to organise and accomplish a 700 mile expedition across Antarctica to the South Pole.

A couple of years after that stunning achievement, Ann invited two friends from the South Pole team to join her on a return expedition to the North Pole. This time there would be no relay: the trio would cover the entire distance on their own. Sadly, Pom Oliver had to be evacuated part-way through the expedition, leaving Ann and Caroline to reach the Pole and achieve their Guinness world record on June 1st 2002.

“A wonderful example of determination and true British grit” – Prince Charles, HRH The Prince of Wales

Ann supports a number of charities including the World Wildlife Fund, Cancer Research UK, and the Cornwall Rescue Group. A proud representative of the Special Olympics, Ann is a recipient of the prestigious Pride of Britain Award.

Ann tailors every speech to her audience and illustrates the importance of strong leadership, teamwork, the correct attitude, setting goals, managing change, overcoming the odds and the importance of persistence. There is no doubt she is an ordinary woman who has achieved the extraordinary.

She is a mother of four children but an ordinary woman who has achieved the extraordinary. She tells her story with passion and humour and her illustrated presentations show what can be achieved with belief, determination and keeping focused on the goal. She has motivated teams in both the private and corporate world and tailors every speech to her audience. Ann’s speaking topics of choice and experience are leadership, teamwork, motivation and global warming/environmental change.

“Her energy, belief and determination is inspiring. She is living proof that humans really can reach new peaks” – The Times

Ann Daniels "Ann was truly inspirational and I was so pleased that I had both the opportunity to meet with and to listen to her story - which is pretty amazing. We had great comments re Ann following her talk and the fact that she bothered to wander around and connect with the delegates was so appreciated. Ann received a standing ovation from the audience and Gary Calveley was bowled over. Once the conference had wrapped up, several people asked if she was still there to talk to her (by which time she had left the hotel) but I gave them further detail so they could google her and find her, making contact etc. Jonathan - you did such a great job in recommending Ann and it was our pure good luck that she was available and happy to do a gig for us; Thanks again - you are a star and you have some pretty spectacular planets in your solar system." Ecolab Supply Chain Conference, Liverpool 2018 by Promotivate
5 / 5
Ann Daniels "Dear Jonathan, Many thanks for your note. Ann was overwhelming! I talked to many participants of the conference and everyone was deeply impressed by her story and very much enjoyed her entertaining talk. I talked to Geoff right after the conference and we both agreed that it was amazing how well prepared she was and how seamless she fit into our own business agenda and messaging of our two-day conference. We much enjoyed how she picked up comments from the presentations that preceded her as well as from the material that we shared with our conference participants and included it in her talk. This way her presentation nailed it and was extremely relevant to us and our audience at the conference. Ann’s speech was a much-applauded highlight of our two-day conference and we were very happy to have her join us on that day. Thanks again for your kind support in organizing this and please also extend my best wishes to Ann. I must say that during my vacation I became very sensitive to plastic bags and never before noted how extensive they are used – virtually everywhere! I made a point of being more careful here and often refused taking a bag, a straw, a cup… by Ann’s doing." Atotech EMEA Conference, Berlin 2018 by Promotivate
5 / 5
Ann Daniels “What can we say other than you are a true inspiration and made an educational leadership conference have a sense of excitement and uniqueness because of your after-dinner contribution. It is no mean feat to engage such a large group of individuals, where a pin could be heard to drop, with such finesse, passion and charm. When you arrived, it was to a group of strangers and when you left, it was from a group of friends with great admiration and respect for your immense determination, spirit and achievements. The standing ovation was a reflection of that.”AET National Conference
5 / 5
Ann Daniels “Ann Daniels presentation was superb with lots of personal experience and an excellent collection of photographs. She was an inspiration and the hit of the conference.”NCC
5 / 5
Ann Daniels “You were a magnificent speaker. A wonderful example of what can be achieved with precise planning, determination and a will to succeed. “ CISCO
5 / 5
Ann Daniels "Your talk and contribution to the day was a great inspiration to us all. We were fascinated by your achievements and you brought a new dimension to the event."IBM Europe
5 / 5
Ann Daniels “A wonderful example of determination and true British grit.” Prince Charles, HRH The Prince of Wales
5 / 5