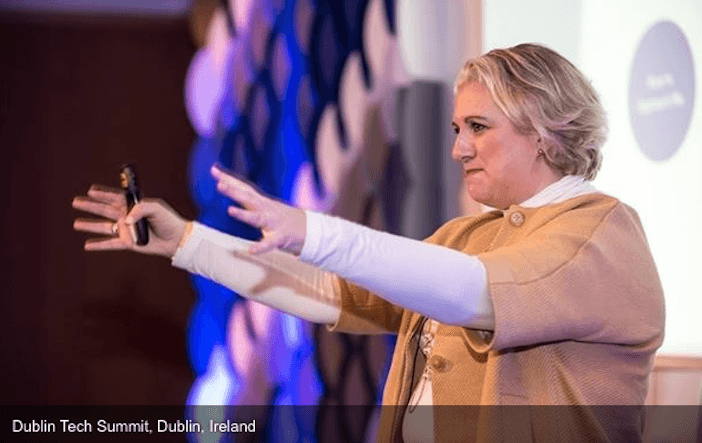 She is a recognised global expert on women’s economic empowerment, access to finance for women entrepreneurs and diversity and inclusion. An EU delegate of the W20 (engagement group to the G20) she works on global public policy to help women entrepreneurs access more capital.

She recently spoke at the first G20 Conference on Women’s Economic Empowerment in Italy in 2021. Since 2019, she has been a Jury member (and Past President) of the Simone Veil Prize for Gender Equality, by the French President’s office, and was invited to advise President Macron on women’s economic empowerment in preparation for the Generation Equality Forum.

As an International Speaker: Anne is a recognised international keynote speaker on Funding Women Entrepreneurs, Gender Equality and Women in Leadership and speaks regularly at many international techs, startup, and gender equality conferences around the world. In 2015 she did a TEDx on Why we should invest in women entrepreneurs, and regularly also speaks for Fortune 500 corporates.

Entrepreneur and role model: Anne is also the founder and CEO of Global Invest Her, a global community and funding content platform that helps women entrepreneurs get ready for funding, faster. She’s an Entrepreneur in Residence at INSEAD business school (ranked N°1 MB1 in the world by Financial Times), mentoring their MBA students on entrepreneurship and has been a judge and evaluator for the IVC venture competition. She also works closely with a select number of women entrepreneurs on their fundraising strategy and action plan. Anne has over 28 years of experience in global business development and management consulting and speaks 5 European languages. She is based in Paris, France and travels globally.

Herself an entrepreneur, Anne is active in the startup world. Some of her experiences include:

Her work has seen her on the receiving end of a number of accolades:

Anne strives to raise awareness amongst both investors and women entrepreneurs regarding the barriers holding them back, helping them overcome them in order to gain faster funding. Anne presents fluently in English, French and Spanish.

Anne Ravanona "Anne is inspirational, energetic and believes in change. She speaks from her heart and is an exceptional storyteller. She made a fantastic addition to our Women’s program inspiring us all to believe in what’s possible." Alicia Tillman, Chief Marketing Officer, SAP Ariba, Prague June 2017
5 / 5
Anne Ravanona “Difficult to describe Anne without looking like a fan! Sharp and reliable, creative and rigorous, warm and professional. As we have worked together on a sophisticated project in a complex environment, she particularly impressed me by standing up, through difficulties, as a partner, a true one.”Anne Guegan, BNP Paribas Leasing Solutions
5 / 5
Anne Ravanona “Anne has an entrepreneurial spirit that shines through everything she does. We worked side-by-side in our professional association, where her pragmatism and hard work shone through. But it has been in the years since that I have really come to admire her ability to start and nurture initiatives, sometimes under very trying circumstances. She is driven by passion for the projects she undertakes.”Kristen Sukalac, ABC
5 / 5