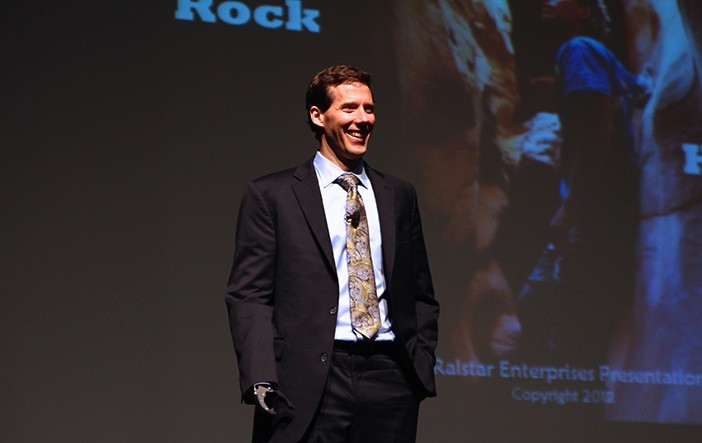 Aron Ralston’s extraordinary human drama grabbed headlines around the world. His remarkable story is commanded the spotlight again and is captured in the brilliant film, 127 Hours. An experienced climber and avid outdoorsman, Ralston was descending a remote Utah canyon alone when an 800-pound boulder broke loose, crushing his right hand and pinning him against the canyon wall. After nearly five days without water and with no hope of escape Ralston made a life or death decision. He chose life by severing his arm below the elbow, rappelling a 65-foot cliff out of the canyon, and trekking seven miles to find his would-be rescuers.

“I stepped out of my grave and into my life again.” – Aron Ralston

Ralston documented his life-altering experience in the New York Times best-selling memoir, ‘Between a Rock and a Hard Place’, which has been adapted for the big screen by Danny Boyle, the Academy Award-winning director of Slumdog Millionaire. The film stars James Franco as Ralston, and his performance, as well as the movie, have been nominated for numerous awards.

As an inspirational speaker, Aron Ralston moves audiences with his unforgettable story. An ordinary man pushed to the limits, Ralston demonstrates the human capacity for the extraordinary. He takes you on a riveting journey in which courage, perseverance, and the human spirit will defy the inevitable outcome.

“May your boulders be your blessings. May you be able to embrace them. And may you find what’s extraordinary in yourself.” – Aron Ralston

Aron Ralston "May your boulders be your blessings. May you be able to embrace them. And may you find what's extraordinary in yourself."Aron Ralston
5 / 5