Borge Ousland is a testimony of mankind’s adventurous spirit and ability to overcome all types of adversity. Described by National Geographic as ‘the most accomplished explorer alive’, he has completed record-breaking expeditions that leave the rest of us in awe.

His expeditions have seen Borge Ousland traverse some of the most difficult conditions on earth. And he was often alone. In so doing, he has achieved what most of us deem impossible. But due to rigorous planning, facing, and overcoming his fears, and finding motivation in situations others would consider hopeless, he has demonstrated how collaboration, commitment, and a clear vision conquers all.

In 2006 the world’s leading solo polar explorer teamed up with Mike Horn. Together, the two were the first to reach the North Pole unsupported and during the darkness marking winter in the area. This expedition is considered the most technically difficult ever to succeed. In 2020, the two collaborated again and circumnavigated the Arctic by themselves.

A prolific writer, Borge Ousland regularly writes articles for National Geographic Magazine and is the author of several well-received books. He has also made numerous films about his various expeditions. Amongst his various international awards, he counts taking first prize for his book The Great Polar Journey at the Banff Mountain book festival in 2009, and first prize for his films Alone to the North Pole at the 1994 Dijon Adventure Film Festival, The Big White at both the 2001 Moscow Adventure Film Festival and the Torello Mountain Film Festival, and In Nansen’s Footsteps at the 2009 Bansko Mountain Film Festival, to name but a few.

As a conference speaker, Borge Ousland shares highlights from his various polar expeditions and adventures spanning the past 25 years including his circumnavigation of the Arctic. He lives in Norway and presents in Norwegian and English.

Borge Ousland “The challenges that legendary polar explorer Børge Ousland has faced and overcome could hardly be more intense. The riveting story that he tells about his adventures has lessons for all of us.” Andy van Duym, Director – National Geographic Live!
5 / 5
Borge Ousland “Børge Ousland’s lecture about how to overcome our fears, how to expand the limitations set by our mind, and how to discover our inner strength, totally captured our audience of 2500 young leaders and enterpreneurs from across Europe. Our conference participants took his message to heart: Follow your dreams. Never stop!”Siiri Poldar, PR manager - JCI Conference 2006
5 / 5
Borge Ousland “Børge Ousland’s polar accomplishments are beyond what most would think possible. Through beautiful images, an understated style, a superb sense of humour and his passion for wild places, he pulls the audience into his experiences.”Bernadette McDonald, Vice President – Mountain Culture, The Banff Centre
5 / 5
Borge Ousland “Børge Ousland is an articulate speaker who is clearly passionate about his adventures and sharing his experiences with others. Through his use of stunning photographs and engrossing stories, he successfully draws his audience into his adventures, and inspires them to think about their own goals and dreams.” Ingrid K. Urberg, Associate Professor – University of Alberta, Camrose
5 / 5 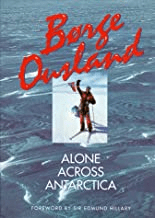