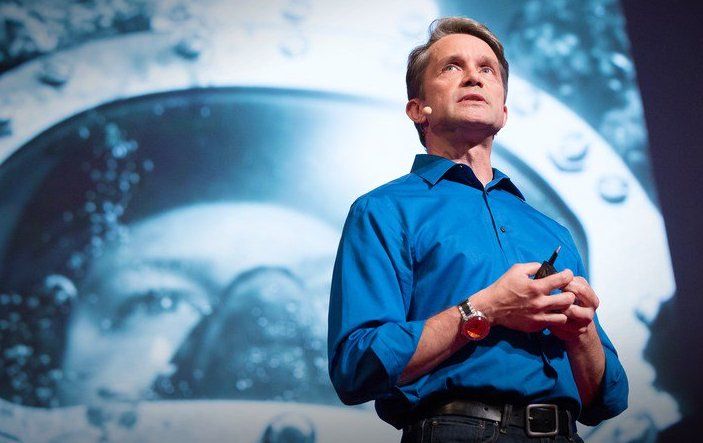 Fabien Cousteau is the first grandson of the legendary Jacques-Yves Cousteau. Fabien spent his early years aboard his famous grandfather’s ships, Calypso and Alcyone; and learning how to scuba dive on his fourth birthday.

He is well known for his study of sharks and from 2000-2002, Fabien was an Explorer-at-Large for National Geographic and collaborated on a TV special aimed at changing public conceptions about sharks called, “Attack of the Mystery Shark,”. Then in 2003-2006, he produced the documentary, “Mind of a Demon,” that aired on CBS. With the help of a large crew, Fabien created a 14-foot, 1,200-pound, lifelike shark submarine called “Troy” that enabled him to immerse himself in the shark world, providing viewers with a rare view of the mysterious and often misunderstood creatures.

For the next four years (2006-2010), Fabien was part of a multi-hour series for PBS called, “Ocean Adventures” with his father, Jean-Michel Cousteau, and sister, Céline. Inspired by his grandfather’s famous 1978 PBS series, “Ocean Adventures”.

On the following years, and as a member of multiple cause-driven and charitable boards Fabien has been working with local communities and children worldwide to help restore local water ecosystems.

In June 2014, Fabien and his team of aquanauts embarked on Mission 31, the longest science expedition to take place at Aquarius, the world’s only underwater marine laboratory located in Florida. Fabien’s Mission 31 broke new ground in ocean exploration and honoured the 50th anniversary of his grandfather’s original underwater living experiment (Conshelf Two) by going deeper, longer and further, while broadcasting each moment live on multiple channels exposing the world to the adventure, drama and mystique of what lies beneath.

Early in 2016, he founded the Fabien Cousteau Ocean Learning Center (“OLC”) to fulfil his dream of creating a vehicle to make a positive change in the world.

Currently, he is working on multiple projects and dedicates much of his time to the exciting programs and initiatives of the OLC. He is routinely seen on network television, such as the Oprah Winfrey Show, Gayle King, and NBC’s Today Show as well as appearing on ABC, NBC, CBS, FOX, CNN, France 2, NPR, MSNBC and many more.

Fabien Cousteau brings as a documentary maker brings a stunning visual presentation that captures oceanography that few people have been able to see for themselves. His keynotes based on his expeditions and an experience as an aquanaut are truly remarkable and unique. His key subject matter is global sustainability and presents worldwide on this subject on premier stages.

One Ocean, One People

Whether a thousand miles away skiing on top of a mountain or living on the beach, water is the earth’s great circulatory system. Yet this rare and crucial element is often taken for granted because we are seemingly surrounded by infinite amounts of the precious liquid. Drawing on his thrilling marine expeditions, inspirational speaker Fabien Cousteau shares stories of indigenous Amazon tribes, diving with whales, and pushing the limits of adventure to discover this bond we all share thru water, what it means, and why we should care.

What’s Good for the Environment is Good for Business

We are all connected by water, and Fabien Cousteau believes it’s something that should dictate the bottom line. In this illuminating presentation, Cousteau makes the connection between business and the environment, illustrating how Corporate America’s contribution to the sustainability of the planet impacts the overall economy. He also shares how businesses can take a leadership role in the stewardship of our oceans while incorporating it into their mission statement.

Plant A Tree? Plant A Fish!

Environmental degradation is all around us, and our oceans are on the forefront of that decline. So what can we do? Confronting such serious topics as climate change, resource depletion, and pollution thru engrossing stories of ocean exploration, marine adventurer Fabien Cousteau broaches these issues with common sense and a realistic, hopeful viewpoint. Offering real world solutions, he uses his not-for-profit Plant A Fish as an example of how one can successfully educate, empower, and engage local communities in practical action that makes a difference.

Fabien travels from New York and retains his French roots and passport.

Fabien Cousteau “Young people are crucial to the health of our ocean. Just as my grandfather Jacques-Yves Cousteau inspired a generation of ocean advocates, it’s now time to pass that excitement for our ocean to the next generation.”Fabien Cousteau
5 / 5