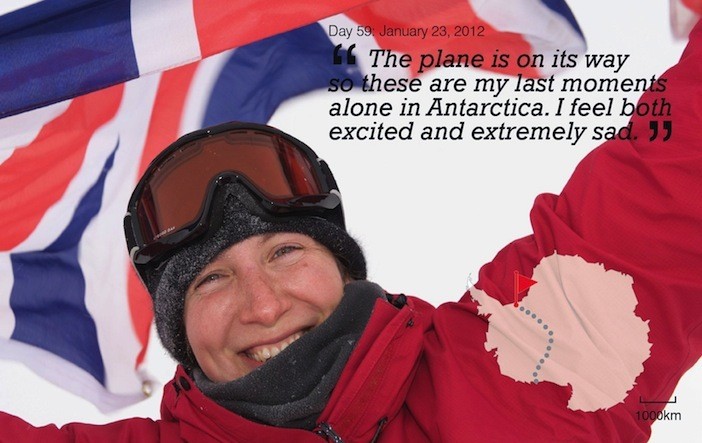 Felicity Aston MBE is the first and only woman in the world to ski across Antarctica alone. The 1744km, 59-day journey completed in 2012 also made her the first person in the world to do so purely by muscle power without the aid of kites or machines.

In 2009 she led the 38-day, 911km Kaspersky Lab Commonwealth Antarctic Expedition, the largest and most international women’s team ever to ski to the South Pole. The team included women from Brunei Darussalam, Cyprus, Ghana, India, Jamaica, Singapore, New Zealand. Felicity was responsible for selecting and training this diverse, multicultural team of ‘ordinary’ women for one of the most arduous journeys on Earth. Aston’s book about the expedition, ‘Call of the White: Taking the World to the South Pole’ and her second book, ‘Alone in Antarctica’ describe her adventures.

Previously, Felicity has led several other notable expeditions including the first British women’s crossing of Greenland, a 700km winter crossing of Lake Baikal in a Siberian winter and an adventurous expedition in Iceland for young people with a brain injury. She was also part of the first, ever, all-female team to complete the Polar Challenge, a 500km endurance race to the magnetic north pole, has completed the notorious Marathon Des Sables, a 150-mile foot race across the Sahara and has recently returned from a 35,000km drive in a Land Rover Defender to the Pole of Cold (the coldest inhabited place in the world) in the far northeast of Siberia.

Trained as a Physicist and Meteorologist, Felicity’s first polar experience was as a scientist with the British Antarctic Survey. Based for three years on a remote research station on the Antarctic Peninsula, her job was to monitor climate and ozone.

As a speaker, Felicity Aston appeals to audiences of all ages. Her ambition, courage and leadership qualities are evident in her talks and she inspires others to take on challenges in every day life.

Felicity shares stories of her adventures with audiences worldwide. Each presentation is uniquely tailored with absolute flexibility and is accompanied by stunning expedition photography and footage where possible, to ensure that the event has a lasting impact on the audience.

In 2015 she was awarded The Queen’s Polar Medal as one o the very few women to have received this special honour and was appointed MBE for services to polar exploration. She divides her time between Reykjavik and her native UK.

Felicity Aston "Felicity delivered perfectly and attendees loved it." Microsoft
5 / 5
Felicity Aston "You told a truly remarkable story, in an incredibly personal and accessible way - a true inspiration to all of us. I've already received a number of praises for your performance...the delegates were captivated"BAE Systems
5 / 5