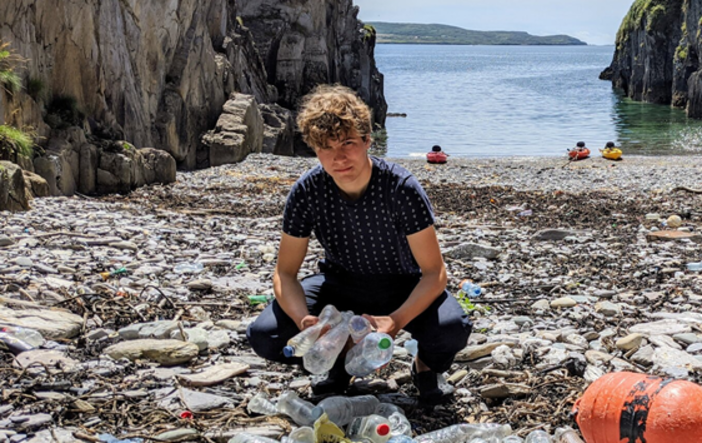 Fionn Ferreira has a great passion for life. He wants to clean up the environment by removing microplastics from water and contribute to achieving a more circular economy

A student, scientist, and anti-plastic innovator, Fionn Ferreira focuses on solving the plastic pollution crisis. His desire stems from the amount of plastic he saw washing up on the shore while kayaking the coasts of Ireland with his dog. This has led to several inventions regarding plastic pollution collection with a primary focus on the threat posed by microplastics.

After several initial attempts at building devices to remove plastic particles from water, Fionn Ferreira came up with a magnetic-based method that removes these particles from water with high extraction rates. Not only is his invention a fast way of doing so, but also non-harmful and clean.

His invention left scientists in awe at several science fairs. It resulted in his being named the Grand Prize Global Winner at the 2019 Google Science Fair. He was also named National Geographic Young Explorer in the earlier half of 2021, named a Forbes 30 Under 30 for Science and Healthcare, and is an ambassador for The AAT Project.

In 2020, Fionn Ferreira founded Fionn & Co. LLC. The company uses his method to test prototypes and build a device for efficient microplastic removals from water on a large scale. He has also commissioned Stress Engineering to fine-tune, build, and test his designs. This was made possible by means of grant funding from Robert Downey Jr’s Footprint Coalition.

Besides his studies and inventing, Fionn Ferreira features in a Global HP Commercial, is creating and developing several children’s television series with a network, and is writing his first children’s book for a well-known publisher.

Although still a student, Fionn Ferreira has become a sought-after global speaker. He has addressed the World Economic Forum, Smithsonian’s Earth Optimism Summit, the European Commission Research Conference, and many other conferences and invested in business enterprises.

Born in Ireland Fionn is currently based in The Netherlands, Fionn Ferreira presents fluently in five languages.

Fionn Fereira “Fionn is an adept student who is very hard-working and diligent. He has been actively involved through various aspects of Schull Community College, including but not limited to, BT Young Scientists Exhibition and Schull Planetarium.”Joe Arundel McSweeney, Student
5 / 5
Fionn Fereira “Fionn showed tenacity and dedication to solving an important environmental problem. He embodies the spirit of exploration”Mariette DiChristina, editor in chief, Scientific American
5 / 5