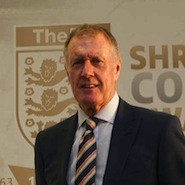 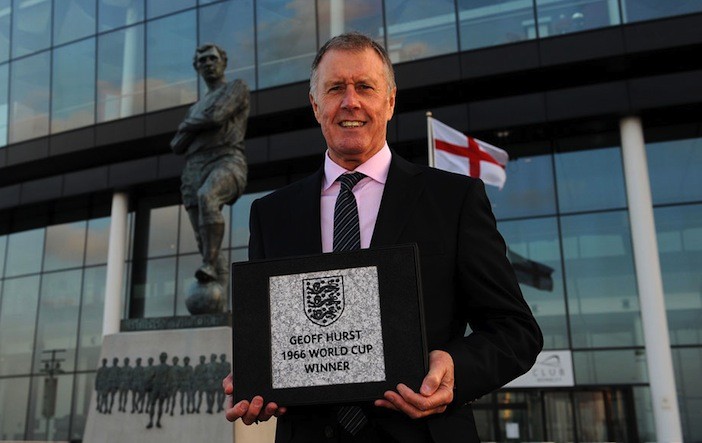 Sir Geoff Hurst remains the only man in footballing history to have scored a hat trick in a World Cup final when England defeated Germany 4-2 in 1966 at Wembley. Geoff scored 24 goals in 49 appearances for England.

Hurst had an impressive career in football and is still very much involved in the sport today. He played for West Ham where he scored 242 goals in 500 appearances and won both the FA and European Cups. He then played for Stoke City, West Bromwich Albion, Cork Celtic and the Seattle Sounders before retiring as a player in 1976 and becoming a manager. Between 1974 and 1984 he managed Telford, Chelsea and the Kuwait national team.

Hurst is most noted for his World Cup hat trick in the 1966 World Cup final against Germany. The BBC commentator Kenneth Wolstenholme described the moment on live television that became one of, if not the most famous footballing quotation of all time….’And here comes Hurst, some people are on the pitch, they it’s all over! It is now! it’s four!’ Geoff Hurst went on to score another hat trick in 1969 in England’s 5-0 victory of France en-route to the 1970 world Cup in Mexico. The Germans took revenge and knocked England out in the quarter finals this time winning 3-2 with Hurst being denied a legitimate goal for being offside.

Geoff did not find football management easy. He was sacked by Chelsea and was forced to return to business when he could not find further opportunities.  He trained as an insurance salesman were he would spend his next 20 years very successfully.

“Suddenly , I was no longer a well known footballer and World Cup hero. I was another man in the street struggling to pay his mortgage. In the space of a fortnight my life turned around completely. The induction course taught me how to approach people. Until this time everybody had approached me – for autographs, for charity events, for photographs,  for interviews, for TV and personal appearances. Now I had to learn how to approach strangers!”

Today he is often asked if he would have preferred to stay in football to which he replies;

“It wasn’t an option at the time. I had bills to pay and a family to look after. In the long term, it proved to be a good decision. I enjoyed my second career and having to go from the top, to the bottom, and work my way back up again taught me something about humility – not a bad lesson for some of the egotistical young players in the modern game.”

Geoff Hurst is one of the few sports stars who is also a very competent conference and after dinner speaker. Geoff recognises the parallels that exist between success and failure in both sport and business. He encourages his audiences to seek new opportunities but also when they happen to make the most of them. He presents a life time of fascinating anecdotes and leaves audiences with an experience that will not be forgotten.

Hurst is one of the few greats of England and international football. His contribution to the English game was recognised in 2004 when he was inducted in the English Football Hall of Fame. Hurst is also one of the few footballers who have been knighted. He has a bronze statuette at Wembley in honour of his success their.

Geoff has been married to Judith since 1964 and has three daughters.

Geoff Hurst 'Not surprisingly we had some excellent feedback from our delegates. Amusing, insightful, iconic. Very entertaining - great to hear from a team player and sports and business expert. Great way to end, what a lovely speaker. Quality opinions. Legend.'SDI Europe
5 / 5
Geoff Hurst 'Sir Geoff was arguably the most balanced guest we have ever has. His professionalism and personal humility was a paradoxical mix that won the greatest respect of everyone there. Coupled with this was his ability to converse on topics at the highest level, whilst knowing when to revert to boyish humour. A truly outstanding individual.'Head of Retail Banking, RBS
5 / 5