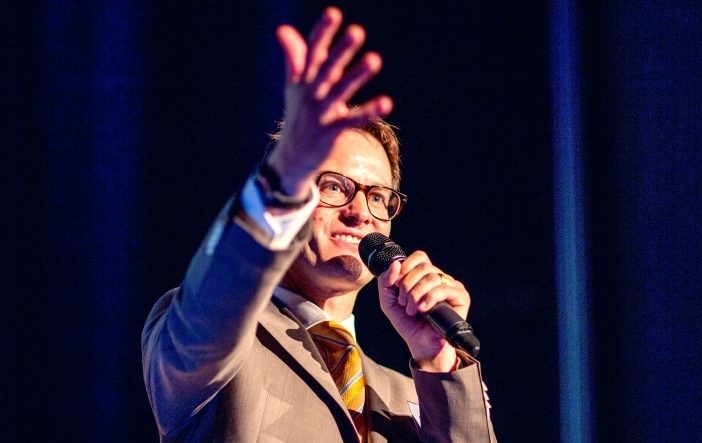 Gert Christen, the Entrepreneur in Residence at Mach49, a company that helps global businesses build a pipeline and portfolio of high potential ventures. He is an independent innovation strategist and former COO for City Innovate. This position saw him help solve urban problems using technology and innovation as co-founder of the Superpublic GovTech lab in San Francisco and part of San Francisco’s team for the 2016 US Smart City Challenge. Gert enjoys working on projects focused on improving mobility in cities, whether by means of innovative mixed public-private transport services or autonomous vehicles as a service.

His career has seen Gert Christen on a rising trajectory. He built up the BlueLion Incubator in Zurich, for example. This is a methodical programme for high potential ICT and Clean Tech startup companies. Approximately 75% of the startups taking part in the programme secured financing within six months. He was also involved in creating Startupfair, Switzerland’s largest event for the startup industry, and in refocusing Startzentrum, Zurich, with regards to its core mission.

In 2014, Gert Christian was awarded the Swiss Marketing Trophy for the best national campaign in the non-profit category. His creation Startup Battle is Switzerland’s first public, live pitching event that is designed to identify promising new startups. He also founded the Entrepreneurship Department at HWZ University in Zurich. In doing so, he created Switzerland’s largest program where student teams support startups and experience real-world entrepreneurship.

Gert Christen has also been an executive in the mobile phone business, where he oversaw mobile content, app stores and mobile operating systems, telecom systems integration, and network rollouts. He also built Nokia’s first commercial app stores in both North and Latin America, and headed project management and engineering for Nokia’s systems integration unit in both Americas. In addition to this, Gert led Nokia’s network rollouts for mobile operators Salt and Sunrise in Switzerland.

In Asia, Gert Christen spearheaded PurpleLabs’ licensing business for their innovative Linux-based mobile phone operating system and built one of the first distribution networks for RF-ID products in Asia. He helped create the market for their textile and workwear industry.

With regards to his educational background, Gert Christen has a Bachelor’s in Marketing and an MBA from SMU Cox Business School in Dallas, Texas.

As a speaker, Gert Christen speaks about the impact of innovation on a variety of industries. He lives in the USA and presents in English and German.

Gert Christen “Gert is the visionary every team desires in their leader. He approaches every challenge with analytical and creative determination, inspiring and encouraging his team with every direction. As our Director, Gert was the leader whose strategy we believed in, whose integrity we valued, and whose charisma made the job a more enjoyable adventure.”Michelle Earney Schroeder, Professional Organizer and Evernote Certified Consultant
5 / 5
Gert Christen “Gert is a multi-faceted executive with limitless vision and a knowledge portfolio that is both deep and wide. I've had the pleasure to work with him for many years. He's leading with passion and empathy and is able to safely maneuver his ship through the roughest waters while motivating his crew to perform at their very best.”John Forslund, Product Management | Strategy | Business Model Innovation
5 / 5
Gert Christen “I worked Gert at Nokia for 3-5 years on various projects. Typically we were trying to either obtain content, establish a key relationship for the delivery of content or applications to our key carrier customers or set up a whole infrastructure system (Preminet, know now as Nokia Content Discoverer) for the procurement of content and SW applications for mobile devices from SW developers, the selection of content by carriers for their subscriber ecosystems and then the delivery and billing of subscribers and payment of royalties to the applicable developers. In all these projects I found Gert to be a fantastically successful business person and driver, both externally with develpers and carriers and internally in motivating staff and resources to achieve major goals and achievements. Gert is able to cut to the chase to understand key business and legal issues and navigate his way through them, all while motivating everyone around him to achieve goals on time or in advance of the required timeline. I wholeheartedly endorse Gert for any company looking for a great business person and leader.”Ross Blair, Counsel at IBM
5 / 5
Gert Christen “Gert is a very energetic, passionate, goal oriented, but very personal individual. He clearly understands what a win-win situation is, and thrives for it. Gert has the creative talent and intellectual horsepower to be a top-level performer in any organization. A person I would very strongly recommend either to hire, or to work together again. It was a pleasure working with Gert.” Markus Kaarto, Director, Head of Licensing at Teosto
5 / 5
Gert Christen “Gert is an excellent colleague and manager with high sales skills and a clear business view. Always motivating. I recommand any company to work with Gert.”Charbel Makhoul, Vice President Of Product Management at Inscape Data, Inc.
5 / 5
Gert Christen “I had the utmost experience of working reporting to Gert for the ramping up of Mobile Internet Applications business for LATAM. It was very impressive his deep knowledge of the business operations, having to estabilish the project management and technical support organizations in the region, under a complex and multicultural scenarios. His strong and consistent driving, hardworking, and competence, at the same time supporting his team for achieving the best, certainly contributed for the successful implementation of the new organization and for the overall high performance at an individual and organizational levels.” Ronaldo de Miranda Louzada, Operations Manager Customer Services Technical Support Project Management PMO Electronic Engineer
5 / 5
Gert Christen “Gert is an extremely knowledgeable, productive, and highly ethical individual who added greatly to Nokia's CDMA success stories in Latin America. He handles pressure well and treats all around him with respect. Gert is a true professional.”Joseph Low, Managing Principal at L2 Advisors
5 / 5