Gitanjali Rao (now 16 years old) became one of the world’s most recognized inventors when Time magazine put her on their front cover in December 2020. Aged just 15 years old Gitanjali became Time’s first-ever recipient of its ‘Kid of the Year’ accolade.

An innovator and America’s Top Young Scientist Gitanjali is passionate about immersing students in the process of innovation. Fast becoming a celebrity in her own right she has already appeared on ABC, NBC, CBS, NPR, The Tonight Show with Jimmy Fallon, and Marvel’s Hero Project. Gitanjali’s method involves building on her experiences which she uses to provide a prescriptive step-by-step process for identifying problems and developing solutions.

At the age of just 15 years old Rao has invented three groundbreaking tools. One of Rao’s apps, Kindly an anti-cyberbullying app, after a first-hand experience with bullying.  The next Epione can detect and diagnose opioid addiction. Her third innovation Tethys early identifies lead in drinking water. She received an EPA Presidential award for the later invention.

“Nobody is born an innovator or a problem solver; you learn as you attempt to solve the problem. Think of ideas, foster them. Finally, remember to take that risk – don’t be afraid of failure. It is okay to fail and make mistakes; that is what kickstarted my innovation journey.” Gitanjali Rao

Gitanjali Rao in 2018 aged just 13 conducted research at the University of Colorado’s Department of Cell Biology to find a solution for prescription opioid addiction. By using the latest research into genetic engineering, she created a colourimetry-based app and device.

The initiative was a world finalist in the Technovation challenge and received a Health Pillar award from TCS Ignite Innovation. Gitanjali Rao first introduced the device which was launched in November 2019 at the TEDtalksNayibaat India. She continues fine-tuning the device under the mentorship of Dr. Michael McMurray from the University of Colorado.

As a result of her growing profile, Gitanjali has was included in Marvel’s Hero Project. The project puts the spotlight on extraordinary and inspiring young people striving to do better, be better, and who try to make a difference in the world.

Besides her work on opioid addiction, Gitanjali Rao developed and implemented a Cyberbullying app called KINDLY under the guidance of Microsoft.  It is based on AI/Machine Learning in the KINDLY community. She was awarded the cyber mission STEM in Action grant to implement this solution.

In 2017, Gitanjali Rao was named America’s Top Young Scientist by the Discovery Education 3M Young Scientist Challenge. Her patent-pending device allows for lead detection in water faster than current techniques. She also won a global Paradigm science challenge and is a David Young Scholar. She has received several scholarships and achievements for science, arts, and community service.

Recognized as a ‘Forbes 30 under 30’ in 2019 for science and her innovation with regards to the lead detection tool, Gitanjali Rao is also an EPA Presidential award winner and recognized as a Gloria Barron ‘Young Hero’ Honoree for community impact.

Since their inception, Gitanjali Rao has open-sourced her lead detector invention, her colorimetry-based algorithm for opioid detection, and the app code for the community which has since been used for other applications.

“An inspiration for an entire generation, Gitanjali Rao is using the power of science and technology to invent sustainable solutions to address some of the urgent everyday problems around the globe. Her most recent innovations attempt to tackle grave issues such as cyberbullying and opioid addiction, while previously, she had devised a solution to detect contaminated drinking water. Shocked by the lead contamination in water in communities worldwide, Gitanjali created Tethys, a simple lead detection device that is portable and inexpensive and provides accurate and quick results.” SHARJAH INTERNATIONAL BOOK FAIR, INDIA. Nov 2021

A Board Director for the Children’s Kindness Network that spreads an anti-bullying message while promoting the importance of kindness, Gitanjali Rao regularly conducts workshops in elementary schools. She hopes to educate children about kindness from a young age. Many of the talks that Gitanjali has given are to young audiences where she feels that she can play an important role in encouraging young people into STEM.

In Dubai in November 2021 at the World Expo’s celebration of World Children’s Day, Gitanjali was appointed as the UNICEF Youth Advocate for 2021.

“I’m so beyond honoured and humbled for this opportunity. It elevates my voice so I can speak louder and have my voice heard, and at the same time solicit new innovators and new change-makers into this incredible world that is being a young advocate. When youth have their voices heard, more people are willing to adapt, change, and go towards a mission together.”

A further award in late 2021 saw Gitanjali win VOGUE India’s ‘Spotlight of the Year at the Women of the Year 2021’ award.

Besides her work in science and technology, Gitanjali is also a prolific writer. She has won national and international awards in writing contests and published her first book, which she illustrated herself, at the age of nine years. Called ‘Baby Brother Wonders’, the book describes the world from her younger brother’s point of view.

Gitanjali Rao also won the International Aviation Art Contest for four consecutive years at the state level and was a ‘TIME for Kids’ reporter in 2018. She wrote articles bringing awareness to the Flint Crises. She is also part of the STEM Scouts and 4-H club and runs innovation and technology workshops for elementary schools across the globe.

The Book ‘A Young Innovator’s Guide to STEM’
5 Steps To Problem Solving For Students, Educators, and Parents

“Our generation is growing up in a time where we’re seeing problems that have never existed before. Older tools and technique don’t necessarily work anymore to solve such issues. We need a different approach that builds on the latest developments in science and takes an alternate path to innovation. Now more than ever, it’s time to come together to make a difference in society. But how exactly do we make that change?” Gitanjali Rao 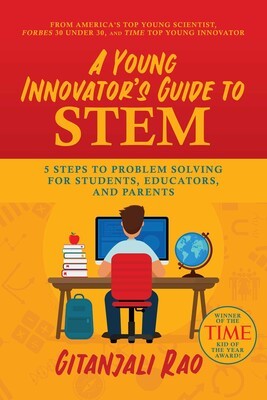 A Young Innovator’s Guide to STEM strives to impact students, teachers, and educators to adapt to a new learning style—one that can have a positive impact on society. It was published in March 2021 and is available in five languages.

Gitanjali is helping to promote education in STEM (science, technology, engineering and maths) to disadvantaged young people in refugee camps in developing countries. She invests a large part of her time designing and delivering workshops that she presents from home. Gitanjali gives free workshops and complements her workshops with a book donation. The refugee camps started their own STEM classes with a facilitator with the book as their guide.

Gitanjali is a role model for projects that support the education and development of young people worldwide. Recognised globally since becoming and TIME’s first-ever Kid of the Year in 2020 she is passionate about promoting STEM with her problem-solving approach.

With retailer H&M she has supported a project to develop a sustainable range of clothing via social media.

As a speaker, Gitanjali Rao has addressed the UN, NASA, four TEDx conferences thus far, spoken at numerous girls’ and global conferences, and has been a UNICEF panellist about the role of Youth to power the planet. Anjali delights in speaking to young audiences, for example talking via Zoom to 2,500 young people from around the world in the ‘Introduce a Girl to Engineering Day’ held by Raytheon Collins Aerospace in Feb 2021. She is also equally comfortable addressing C-suite leadership groups as she has done in March for Dell Technologies. She is a naturally gifted speaker, requiring minimal preparation and very competent streaming from her home studio.

She lives in Denver, USA, and presents in English.

If you would like to check the availability of Gitanjali for a commercial opportunity or to give a talk in-person you can contact her agent Jonathan Curran here at Promotivate’s main office using the form below, by phone or alternatively send by email to gitanjali@pro-motivate.com

Gitanjali Rao "Jonathan, our lunchtime lecture has just ended. Gitanjali was engaging, visionary and inspiring. We had classrooms of students in attendance though screens were off so we cannot give you numbers. The audience was captivated by her story, inventions and insights. Thank you to you and Linda for facilitating this event, supporting us and Gitanjali in making today happen. We are very grateful to you. Please also do pass on our sincere thanks to Gitanjali for giving us so much to think about and for inspiring us to reflect on what we can all do to make our world a better and more just place. " Salters Institute
5 / 5
Gitanjali Rao "Gitanjali's thoughtful insights and step-by-step guidance provide practical lessons for creative thinkers and problem solvers to build crucial real-world skills for personal growth and impactful innovation. A role model herself, Gitanjali's entrepreneurial spirit and commitment to empowering young minds inspires readers of all ages. Students, educators, and parents will learn how to think differently and work more effectively to solve the problems of tomorrow." Karlie Kloss, Supermodel, Entrepreneur, and Founder of Kode with Klossy
5 / 5
Gitanjali Rao "Gitanjali Rao is an inspiring innovator and motivational speaker about her experiences as America's Top Young Scientist. In her book, she provides an infrastructure to help students, teachers, and parents solve real-world problems in a way that can lead to real change. As a former educator, district leader, and STEM thought leader, I highly recommend this book to anyone interested in becoming an innovator to make the world a better place." Dr. Cindy Moss, VP, Global STEM, Discovery Education
5 / 5
Gitanjali Rao "Gitanjali has done a remarkable job breaking down the process of innovation—all the way from developing the curiosity and mindset of an innovator, to competing in global competitions. It is a very fun, fast read, with plenty of rich strategies and tips that are clearly drawing on her experiences as a young innovator, to competing in global competitions. It is a very fun, fast read, with plenty of rich strategies and tips that are clearly drawing on her experience as a young innovator. She doesn't shy away from sharing her hesitations at each step—brainstorming can feel unproductive, research can feel intimidating, teamwork can be slow—but for every roadblock, she provides. Well done, Gitanjali! I hope each and every kid in the world reads this book and realizes that nothing stops them from innovating and making the world better. What an awesome message!" Tara Chklovski, Founder and CEO, Technovation
5 / 5
Gitanjali Rao "In short, yesterday’s session was great. She (Gitanjali) is natural, authentic, genuine, intelligent and poised. It was a pleasure having her speak to the leaders yesterday, and I expect today’s session to go equally well." Leah Filipkowski | Dell Technologies USDell Technologies - Virtual Client Leadership Series, March 2021
5 / 5 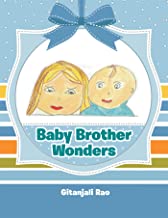