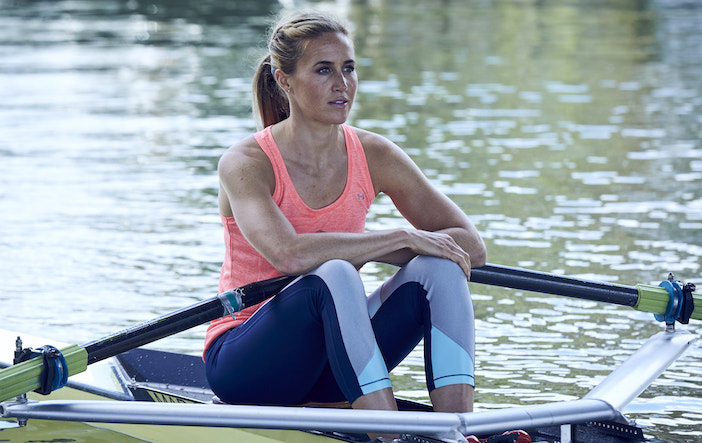 With Heather Stanning they won Britain’s first-ever Olympic Gold Medal in rowing at the London 2012 Olympic Games. Since 2011 they have been undefeated internationally and hold the World Record in their women’s pairs category.

At the Rio Olympic Games in 2016, Glover’s reign continued with Stanning when they retained their Olympic title. Meticulous planning, science and commitment to leave no stone unturned all played significant importance in Glover’s success.

Remarkably Helen only took up rowing in 2008 when she was identified through the UK’s Sporting Giants recruitment scheme designed to identify and train athletes of a suitable size. She is a gifted sportswoman and competitor and prior to rowing had competed internationally in cross country and trained with the England Hockey Satellite Squad. Proving her sporting talent Helen has won the TV Olympic Superstars convincingly, sweeping aside all challengers and received an MBE after her Olympic success.

Following the 2016 Rio Olympic Games, she married popular TV wildlife presenter Steve Backshall and they had their first child, Logan. In 2017 she entered and won the 125 mile Devizes to Westminster ultra-endurance kayak race. Six days later she ran her first marathon in 3 hours 5 minutes. Later that year she qualified for the Ironman World Championships in Cape Town.

Helen was awarded an MBE in 2013 for her services to rowing and has a post box painted gold in her hometown of Penzance, Cornwall in recognition of her Olympic success.  She is a well-known face commentating on the BBC at the Oxford and Cambridge Varsity Boat Races, is an ambassador for the Scouts and continues to pursue her passions including wildlife and improving the environment.

Helen Glover "Helen Glover the Olympic Champion has absolutely dominated international women's rowing. Whoever she is paired with, they win. Never beaten, she's ranked by FISA as the World's #1 Female Rower. Her rivals know that they are racing for silver medals. A truly inspirational example of achievement."We say ...
5 / 5