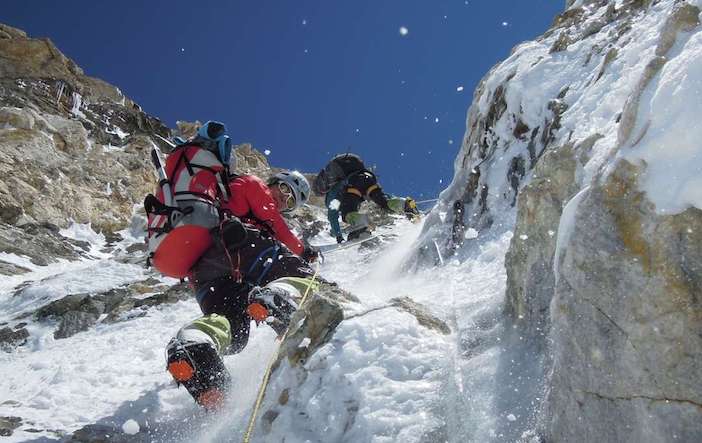 Jamie Andrew OBE and his partner Jamie Fisher were climbing the North Face of Les Droites in the French Alps when caught in a storm. By the time they were rescued, his partner had died and Jamie’s hands and feet needed amputating due to frostbite.

Despite the challenges faced, Jamie was soon on his feet by means of prosthetics, returning to work a few months later. His inspirational best selling autobiography ‘Life and Limb’ represents a true story of tragedy and survival.

Jamie Andrew has, since the storm that cost him so much, been active in a number of sporting activities, including running, paragliding, skiing, snowboarding, swimming, caving, and sailing. His biggest challenge was his return to mountaineering. He conquered this challenge in 2000, climbing Ben Nevis and raising over £15,000 for charity.

The next year saw him return to France, climbing the Cosmiques Arete on L’Aiguille du Midi. This was followed by the London Marathon in 2002, an event that saw him raise a further £22,000 in aid of charity. Since then he has climbed a number of mountains in Europe, including Mont Blanc du Tacul (4200m) and The Monch (4099m). An attempt on Mont Blanc (4 800m) was abandoned 300m from the crest due to bad weather.

Jamie also conquered Africa, climbing Kilimanjaro (5 895m), Africa’s highest mountain, raising over £5,000 for a leprosy centre on the slopes of the mountain.

Titanium Man is Jamie Andrew’s version of the Iron Man Challenge. It consists of open water swimming (2.4 miles), cycling (112 miles), and a 26.2-mile marathon completed within 24 hours. It is considered one of the most grueling feats even for those who are able-bodied.

Jamie’s passion, sincerity, enthusiasm, and sense of humour are evident in his speaking, leaving none in his audience unaffected. His uplifting story is motivational and uplifting, while his message about making the most of life and always seeing the positive in what life gives you encourages one to do the best in your given field.

In over 15 years Jamie has spoken in more than 40 countries, on 5 continents for a diverse range of companies including Tetrapak, Toyota Motor Sales, Vodafone, Roche, Danone, Proctor & Gamble, Pepsico and Microsoft.
Jamie shares his remarkable story, illustrated with stunning slides, in a simple and honest style that never fails to engage with audiences.

He explains how he was able to dig deep into his reserves, to be resilient, and to face up to the hardest challenges of his life using simple, key techniques such as goal setting and focusing on his key strengths.

Some of the important subjects that he touches upon include motivation, coping with change, team-work, using the strengths of those around you, and self-belief.

Jamie’s story is challenging on a number of levels and is an uplifting tale that really stimulates the mind and encourages us all to consider the challenges that we face in our own lives, on a day to day basis.

Jamie can also provide signed copies of his bestselling autobiography, Life and Limb, as a souvenir gift for delegates and work with social media.

Jamie Andrew “People really valued what you brought to us - and the messages have stuck - so THANK YOU!” Susan Goldsworthy, Tetra Pak
5 / 5
Jamie Andrew “Jamie did a fabulous job today. It was an extraordinary experience to meet him and hear his story. I had feedback from many of the people who attended, and everyone was inspired by his positive positive approach, his sense of humour, and his courage… Thanks so much for introducing him to us. He really made a difference.” Jane Beseda, Toyota Motor Sales
5 / 5