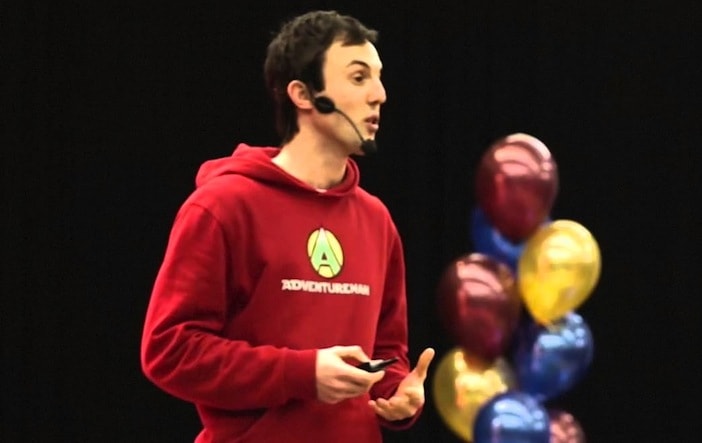 Jamie McDonald, against all odds, has become something of an adventurer.

Jamie spent the first nine years of his life in and out of hospital with a rare spinal condition known as syringomyelia. Combined with a very weak immune system and epilepsy, Jamie’s health was very poor. He was treated at Gloucestershire Royal Hospital and Great Ormond Street Children’s Hospital in London. At nine years old, the symptoms eased, something Jamie attributes to an effort to become more active.

After working as a tennis instructor to save up for a deposit on a house that he did not buy – Jamie then began a quest, with his own money, to give back to the hospitals that supported him.

In 2012, he bought a second hand bike and decided to cycle the 14,000 miles from Bangkok to his hometown Gloucester, passing through dozens of countries. Along the way he was shot at, arrested and slept rough.

Just two days after he finished the journey back from Bangkok; he made the decision to attempt the world static cycling record, which stood at 224 hours and 24 minutes. It was a challenge he’d conceived whilst cycling from Bangkok.

He finally stepped off the exercise bike set up within a marquee in Gloucester after pedalling for a world record breaking 268 hours – more than eleven days. Throughout both challenges, Jamie raised tens of thousands of pounds for a charity that benefits the children’s ward of Gloucester Royal Hospital.

These feats sparked a thought in Jamie’s mind – if he was never a cyclist before these two challenges, but he could go on to break one of the toughest official world cycling records – what else could he achieve?

In February 2014, Jamie finished an historic journey across Canada, becoming the first person in history to run the 5,000 miles from the Atlantic coast to the Pacific coast without the aid of a support crew. Starting in March 2013, his run raised more than £200,000 for sick children in Canada and the UK. He battled -40°C temperatures, the Rockies, a frostbitten nose, numerous potentially challenge-stopping injuries (including the permanent misshaping of his right foot) and more to finish in Vancouver, running the equivalent of a marathon most days – whilst wearing a Superhero costume The Flash.

His adventures have made news all over the world.

After the adventures, Jamie cites current and future generations to achieve, as a huge motivation. Since he has created a new Superhero, Adventureman, began Motivational Speaking and hopes to continue to inspire and empower people through his new charity,  Superhero Foundation.

Jamie has delivered motivational, inspiring and entertaining talks for Corporate events, Schools and After Dinner speeches all around the world.

Having overcome debilitating and life-threatening childhood illnesses to conquer monumental physical and mental challenges in a bid to give back to those that helped him, Jamie is keen to share his story of beating the odds and proving that we are capable of much more than many of us know.

In short, Jamie hopes to ‘Find Your Inner Superhero…’

“Jamie has an inspiring story to tell, using his stories to motivate others with his incredible adventures” – Sir Steve Redgrave, 5 time Olympic Gold Medalist

The Keynote – ‘Find Your Inner Superhero’

Guinness World Record holder Jamie McDonald draws on his experience as an award-winning adventurer and fundraiser to take audiences through the process of motivating themselves and others to achieve success. Having spent most of his childhood in hospital with a life-threatening condition before attempting adventurous feats to give back to the charities that helped him, Jamie knows what it is to overcome adversity by pushing himself beyond what he thought he was capable of.

Audiences will be challenged to think about new possibilities, new opportunities and new perspectives. They will be inspired to make choices that will benefit them and the people around them. They will learn that the difference between ordinary and extraordinary is a matter of their own mindset – and that anything is possible with the right motivation.

Topics Within The Keynote

Jamie McDonald “Phenomenal” Sir Geoff Hurst, former England footballer
5 / 5
Jamie McDonald “Best speaker we’ve seen in 25 years. A real and refreshing change from what you would normally expect in the corporate affair” Sunlife
5 / 5
Jamie McDonald “I found Jamie’s story very inspiring. I loved it, I loved why he does it, and I love him. I believe he is of a rare kind of person. He does things for other people rather than for himself. He has shown me the bigger picture, and I’ve learnt that rather than spending my life working for myself, I should spend it helping others whatever they need. I’ve realised that if you judge, you cannot be free. But if you simply love, and help other people, or environments, there can be so much more sense of accomplishment than working a day job for the government or macdonalds. I appreciate him so much” 12 year old, Prince William School
5 / 5
Jamie McDonald “We know of Terry Fox, my brother, to have determination, commitment, dedication, living mind over matter and you’ve shown all of these characteristics and especially shown these kids today, that anything is possible. Incredible presentation, thank you” Fred Fox, at Terry Fox’s School
5 / 5
Jamie McDonald “At an event attended by over 500 staff, Jamie’s brief was to; have some fun, and show the audience what is possible, when you never give up - well he certainly achieved all of that and more. Jamie provoked laughter, tears, shock, more laughter and transmitted a whole chunk of pride and self-esteem to the audience, with his inspirational and uplifting story telling. 5 months later staff are still talking about it! Jamie’s talk fosters a lasting connection, on never giving up, always moving forward and finding the superhero within. Will definitely be having him back” NTT Europe HQ
5 / 5
Jamie McDonald “We flew Jamie around Great Britain to visit all of our offices’, he has a hugely entertaining story and is one of great personal endeavour; his tenacity in achieving his goals and in overcoming barriers is inspirational. Jamie’s engaging presentation style, his experiences and the challenges he faces, resonate well with his audience from a both a personal and business perspective”Capita
5 / 5
Jamie McDonald “We googled ‘Superhero’ and that’s exactly what we found. We’d like to adopt him a few weeks each year and bring him back to Canada” Ontario’s Coaches Association Conference
5 / 5
Jamie McDonald “I can honestly say that we have never received so much immediate positive feedback for a speaker before! You have a genuine gift of authentically engaging with your audience – a rare talent. I’d highly recommend you to others, whether looking for a motivational speaker or for a way to add value to a leadership programme” CIPD
5 / 5
Jamie McDonald “I watched Jamie inspire, entertain and motivate thousands of people with an incredible speech” Mike Tindall, former England Rugby Captain
5 / 5