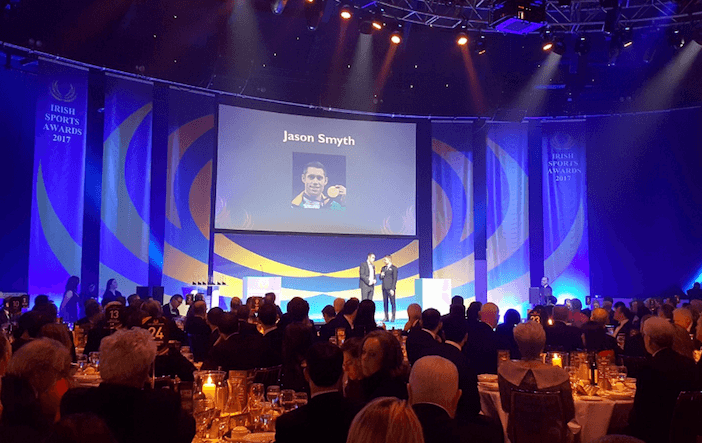 Jason Smyth was born and raised in the northwest of Ireland in Derry. He is the first of five children but is the only one in his family with Stargardt’s disease. At the age of eight this life-changing condition reduced his vision drastically. Over the years it has continued to worsen to the point of him being left with roughly five percent normal vision. In spite of his disability, it has never slowed him down.

Jason began running competitively at the age of sixteen. At the age of seventeen, he became involved in Paralympic sport and proceeded to win gold on the track at both European and World Championships.

At the 2008 Paralympic Games in Beijing he reached new heights by winning two Paralympic gold medals, and setting world records in the T13 100m and 200m sprints.

He added to his success during the 2012 Paralympic Games in London by retaining his titles and beating his own world records in both events. Making him the fastest Paralympian ever.

He has added both 2 European and World gold medals to his collection since then. In 2016 Jason won the T13 100m Paralympic gold medal in Rio.

Throughout his Paralympic successes, Jason has strived to bridge the gap between Paralympic and mainstream competition. In 2010 he became the first Paralympic athlete to compete at the able-bodied European Championships. He continued in 2011 by competing at the 2011 World Championships, and then in 2014, he represented Northern Ireland at the Commonwealth Games. He is also the Northern Ireland record holder over 100m, as well as currently being the fastest man in Ireland.

At the 2020 Summer Paralympics, Smyth again won Gold in the 100m final. He clocked 10.53 seconds as he finished 0.01 ahead of Algeria’s Skander Djamil Athmani.

Jason Smyth is an inspiration to many people in Ireland. If you would like to enquire about booking Jason to give a talk and speak to your organisation please contact Promotivate at ask@pro-motivate.com

Jason Smyth "Jason, thanks so much for today, your speech was fantastic – incredibly frank, thought provoking and genuinely inspirational. The part that stood out most for me was when you spoke about learning first to accept your disability before you could realize your full potential. I know we’ll be talking about your visit for a long time and we’ll hopefully get the video up on the Citi Broadcast center so it can be viewed by Citi employees around the globe!"Citi Group, Belfast 5th September 2017
5 / 5
Jason Smyth “It obviously means a lot (winning gold in Rio) – with Beijing and London going so well, it’s about trying to continue that and maintain that high standard. You put years of work in for one moment so it means everything to go there and do well,” Jason Smyth himself...
5 / 5