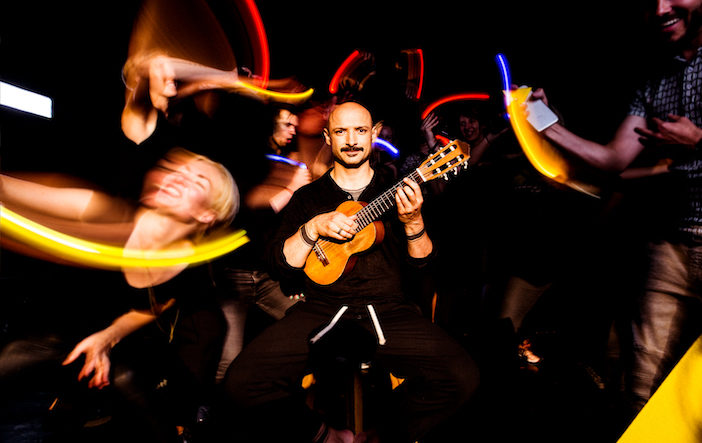 A successful musician Jurgis Did changed his focus after moving to Lithuania from Colombia in 2000. This led to numerous awards and projects, including “The Ball & Chain” and “InCulto”. Yet the restrictions in the industry found him out of touch with his true calling – activism.

Besides music, Jurgis Did has a background firmly established in business, as he studied Political Science and Business Administration, gaining an MBA in 2015. But he refuses to be a square peg in a round hole and went on to break the mold and explore other possibilities for his music-making process. This led to an exploratory journey that served to redefine both him and the scope of his activities. He now engages in a form of participatory music that not only entertains but enlightens and engages his audiences.

Besides his music, Jurgis Did hosted TV shows, sat on the board of various NGOs, and entertained audiences from diverse institutions and backgrounds. His aim is to leave the world a better place than he found it.

As a conference speaker/entertainer, Jurgis Did mixes his passion for music and social phenomenon, thereby showing that an artist is not just an entertainer.

He brings a brilliant concept to the virtual (and live) speaking sector with his ability to take a companies objectives and build them into an interactive musical production. He brings the audience together whether virtually or in person, creating entertainment that encourages participation and team interaction. The outcome is uplifting and beneficial for those that join Jurgis’s sessions.

An artist is also an educator that can make a vast difference. He lives in Lithuania and presents in English.

Jurgis Did Jurgis Did is a present-day magician. His music has magnetism, this rare ability to help you feel one with the people around and tap into your inner self at the same time. His performance at our Transparency School was truly special.Sergejus Muravjovas, CEO, Transparency International Lithuania
5 / 5
Jurgis Did "The community quickie left us speechless. Jurgis enchanted us with his musical abilities and engaging communication. It’s an exceptional for an artist to not only perform but also involve the audience to become part of the musical spectacle. In today’s context of pandemic worries, his music and sense of humour was completely reviving."Prof. dr. Artūras Razbadauskas, Head of Klaipėdos University
5 / 5
Jurgis Did "Jurgis is truly one of a kind maestro, musician, crowd-engager, pied-piper, inspiring empowerment coach in-disguise. I’ve spent 20 years curating exclusive events with some of the world’s leading talent, and I have never seen anyone so effortlessly capture the attention of a room, and align disparate focus into a unified frequency and collective movement of joy and celebration."Yarrow Kraner, Founder, HATCH & H360.ai
5 / 5
Jurgis Did "Jurgis brought fun, laughter and joy to our online UPPSTART event. He has the unique gift of getting any audience to participate and engage. Within minutes he had people dancing on their chairs! The Quickie hit the perfect balance of being deep and thought provoking, but highly entertaining at the same time."Jason Dainter, Founder UPPSTART
5 / 5
Jurgis Did "Jurgis’ extraordinary energy is so contagious it transcends even digital distance! For UNFINISHED’s first online edition, he made our community vibrate all together once again by opening and closing our festival with his signature punch. His music and his words proved essential in turning our worldwide-spread participants into a unified community." CristianCristian Movilă, Founder of UNFINISHED
5 / 5