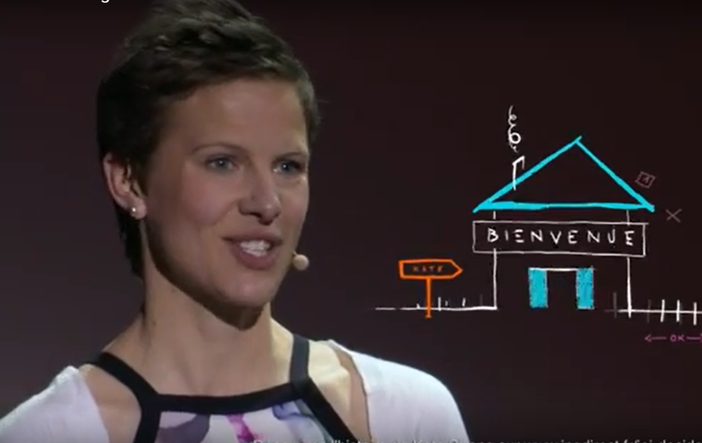 Today, Kate Strong is a successful entrepreneur and World Champion Triathlete. But this does not mean she has not had her share of adversity.

After obtaining a double master’s in mechanical engineering and engineering management, Kate Strong travelled through Latin America before settling down in Australia. There, together with her partner, she started an enterprise in the Blue Mountains. Nine years later, however, things took a downward decline. This left her alone, struggling to run a business by herself, and with over a million Australian dollars in debt.

Kate Strong was in a rut. Her life was extremely unbalanced and was consumed by work. On one rare occasion where she took some time for herself, she went hiking. It was on this walk that she realized she needed to do something for herself.

Before starting her business nine years previously, she had started training for and completed a ½ ironman event. Being an Ironman had been her dream for over a decade since she was introduced to this sport while on top of a volcano peak in Guatemala. But after completing her first ½ ironman event, she put her dreams on hold and focused on her relationship and business – conforming to what other people expected from her. Kate Strong, after facing this challenging time in her life alone, decided to start training and competing.

Despite now being in her 30’s, Kate Strong started on an intense exercise regime. Before competing in her first Ironman, she had no idea whether she would even finish the race, let alone win it. But her goal had, from the start, been to not only to be her best but to be the best. And she succeeded.

In 2014, Kate Strong won her age category in the Weihai Long Distance Triathlon World Championships. This win unlocked her opportunity to sell her Australian business and return to the UK and follow her passion.

Today Kate Strong works with entrepreneurs and business leaders to remove the glass ceiling of their potential while creating sustainably-driven organisations. She offers workshops and bespoke consulting allowing businesses to grow a triple-bottom-line: For people, For-planet and For-profit.

Kate Strong, as a speaker, believes anyone could achieve what she did but most people do not choose to step away from the comfort zone and strive for the extraordinary. Her talks focus on such aspects as being your best self, overcoming adversity, mental health and wellbeing, and trust.

Kate lives in the UK and presents in English and French.

Kate Strong ”Kate recently spoke at a Conference I organized around Female Entrepreneurship, to say she was inspirational was an understatement. Kate spoke with so much passion, she showed resilience, and educated our audience with her great depth of knowledge. Kate is a true professional, great speaker and an excellent all round amazing person too. Thank you Kate for your time and support.”Dawn Evans, CEO of Ajuda Training
5 / 5
Kate Strong “Kate is an amazing woman, having a significant impact on her coaching clients. She's quite special in her field, as she's got the knowledge of a top-class coach and the experience to back it up, consistently demonstrating that she knows how to help clients to reach their goals. She's also an inspiring keynote speaker, sharing her journey to being a World Class athlete with humility, vulnerability and huge impact on her audiences. She proves that there is strength in being open and has a wonderful way of engaging with her audience, bringing them into her journey. I highly recommend Kate as a coach and speaker.” Errol Abramson
5 / 5
Kate Strong “Kate gave a fantastic presentation at an event that I ran sharing her inspirational story and giving lots of value to everyone in the audience! I can highly recommend Kate's as a motivational & inspirational speaker!”Matt Albiges, Yes! Group
5 / 5
Kate Strong “Kate is inspirational and hugely talented. Her dedication and attitude are admirable, and it’s been a real pleasure having her as a member of our Mastermind programme.”Nick James, Founder of Expert Empires
5 / 5
Kate Strong “To all of Kate's friends and connections you deserve to know from my own face to face experience with Kate Strong that she is an incredible person. She's not only an entrepreneur, business consultant, media content creator, traveller, author, mind-set coach, ex world champion runner athlete but also an amazing public speaker. When she told everyone her story the whole time my eyes were focused on her like laser beams. Her story was so empowering. The adversities she had and how she triumphed with such success was mind blowing. She looks so sweet and innocent on the outside but inside she's got a lions spirit from the sound of her story. Her success in public speaking shines through at the speaking event and she gave me support as a young aspiring speaker and gave me more guidance and is still guiding me today. All I can say is that if you don't believe me then book to see her speak or watch her TEDx talks on YouTube because she is such an inspiring woman.” Joseph Bryant, attendee at one talk
5 / 5
Kate Strong “Kate Is one of the most inspiring humans that I have ever met. Her energy, grit and capacity for learning is something which I think we could all benefit from.”Owen Wood, Director of Park Row Marketing
5 / 5
Kate Strong “Kate is an excellent Keynote Speaker. We had excellent feedback from attendees of her seminars at two recent Expo events that we organised. Kate has a fascinating profile of experience which piques people’s interest even before they’ve seen her; compelling subject matter on relevant, topical issues; great engagement with the audience, and she’s nice to work with. We’ve asked her to speak again at a future event. Can highly recommend.”James Tribe, Founder Get Connected UK
5 / 5
Kate Strong “Kate gave a fabulous workshop for the Vegan Business Exchange last year on how to go from your 9-5 and turn your idea into a business. She provided great insights into both the personal and business development side of becoming an entrepreneur. I highly recommend Kate as a speaker and facilitator - she has a great story and is super driven to help entrepreneurs succeed.”Sabrina Lee, Vegan Business Exchange UK
5 / 5