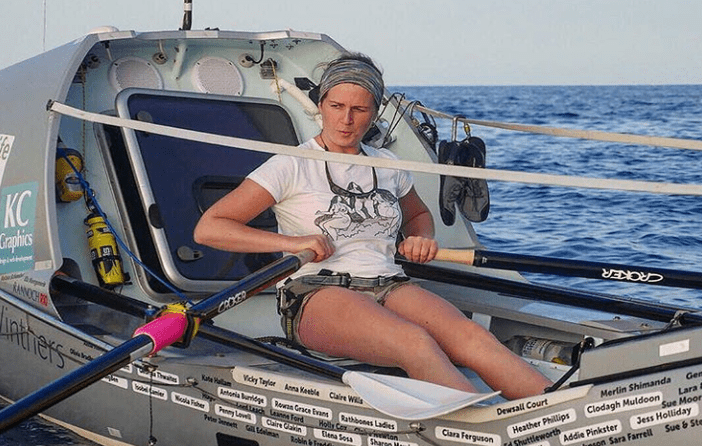 Kiko Matthews led a relatively normal life. She was a science teacher and life was good. Then things took a turn, changing her life forever. In 2009, Kiko was diagnosed with Cushing’s, a condition caused by a tumour on the pituitary gland, and nearly lost her life. Walking was a challenge, and climbing stairs a major achievement. She suffered from diabetes, insomnia, memory loss, psychosis, muscle wasting, osteoporosis, puffy face and stomach, and excessive hair growth. Kiko Matthews met her challenges head-on and made the decision to live her life and challenge both her mind and body to see what she was capable of. She did not disappoint.

“…I see challenge as an opportunity to develop skills and knowledge as well as resilience, confidence and relationships.” – Kiko Matthews

In 2012 Kiko was part of a team that drove to Uganda from the UK, where she stayed and worked for a while, moving on to Zanzibar before returning home to the UK. The lady loves adventure.

Kiko went on to co-found The Big Stand in 2015, a charity that aims to empower by means of education and inspire through adventure. The ultimate aim of the charity is to develop confidence while creating healthier people and environments.

The same year saw Kiko found SUPKiko. Her business gives stand up paddle-boarding lessons and was responsible for the birth of #trash4treats which combines SUP lessons and experiences with trash collecting from London waterways.

Her next challenge was crossing the Atlantic single-handed and unaided. Kiko had no formal rowing experience before this, but with the right coaching, she was soon doing well. But in 2017, just eight months before embarking on the journey, she was once again diagnosed with a tumour. After coming through the life-saving treatment in London’s King’s College Hospital, and at thirty-six years of age, Kiko decided to raise funds in gratitude.

Kiko Matthews broke the world record by six days, rowing 16 hours a day, seven days a week. Kiko Matthews is the fastest woman to row the Atlantic unaided, arriving in Barbados on 22 March 2018. Her 3,000-mile journey from Gran Canaria to Barbados took 49 days. She is only one of five women to have completed the crossing.  True to her word, she raised over £70,000 to help build a new intensive care unit at King’s College Hospital in the process.

“The thought that eight months ago I was lying in hospital having my brain operated on and now I am here having rowed the Atlantic, I guess I am a bit proud. I have shown that anyone can attempt anything given the right attitude, belief, and support.” – Kiko Matthews

Kiko Matthes has a wealth of experience as a public speaker and has addressed gatherings that include the likes of Women of the Feature, Rathboes Wealth Investment, UBS Financial Services, Joyce Guinness Recruitment, and Agora Corporate Agency, to name but a few. She considers herself an advocate for women, inspiring women of all ages to achieve their own goals.

“I relate my own experiences and challenges I have faced, my successes, and how I have overcome adversity and failures; all issues that many women deal with on a daily basis.” – Kiko Matthews