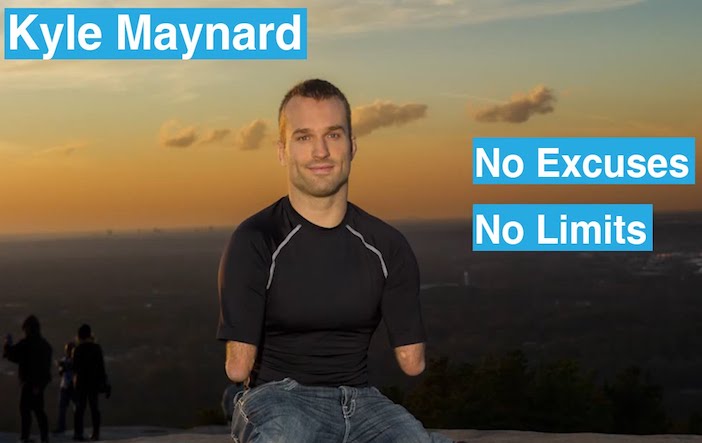 Physically challenged Kyle Maynard has not let his disability rule his life. Rather, he has embraced it and used it to set challenges most able-bodied people would baulk at. The 2-time Espy Award winner, record-breaking mountaineer and sports star with his ‘no excuses’ attitude, provides insight into the qualities needed to overcome your personal challenges and succeed.

Kyle’s first challenge was presented by his father, a military veteran, who challenged his son to eat unaided at the age of eighteen months. By age ten Kyle was a regular on the football field, and by the age of 12 years, started wrestling.

Kyle’s lifetime guiding principle has been encapsulated in his bestseller, “No Excuses”. It is a testament to a young man that has accepted what most would deem insurmountable challenges and overcome them. The best-selling author and world class athlete has never allowed his physical challenges to interfere with him realizing his dreams.

“Every person on the planet has a disability – not just those we can see. And we all choose whether we allow our lives to be defined by them or not.” – Kyle Maynard

It is this mindset that saw Kyle rack up 36 wrestling victories during his senior high school year, where he also earned the GNC title of World’s Strongest Teen after managing to bench press 23 repetitions of 240 pounds. Since 2009, Kyle has competed in Mixed Martial Arts and is both the founder and owner of No Excuses Crossfit gym.

In 2012, Kyle set himself another challenge – to climb Mt Kilimanjaro, the highest mountain in Africa, without the aid of any prosthetics. He was the first quadruple amputee to do so. This event received wide coverage by the press. He managed to raise money and awareness for wounded veterans and Tanzanian school children with disabilities. It also won Kyle his second ESPY (Excellence in Sports Performance Yearly) Award – for Best Male Athlete with a Disability.

Four years later saw him reach the summit of Argentina’s Mount Aconcagua, the highest peak in both the Southern and Western hemispheres. This feat saw Nike feature Kyle in their commercial “Unlimited Will”, a commercial that was featured on a global scale during the 2016 Olympics.

Amongst his sports accomplishments, Kyle counts champion wrestler, MMA/Brazilian Jiu-Jitsu fighter, weight lifting record setter, and mountaineer. He is also no stranger to the television spotlight, and has not only appeared in the television features highlighting his climbing successes, but featured on Larry King Live, Good Morning America, 20/20, and The Oprah Winfrey Show, amongst others.

Kyle is also a philanthropist and serves on a number of boards and foundations, e.g. the K2 Adventure Foundation, The Travis Manion Foundation, The U.S. Special Forces The Honor Foundation, and the Juvenile Diabetes Research Foundation, to name but a few. Additionally, Kyle serves as an ambassador of No Barriers USA, Rhe USO, and The Wounded Warrior Project.

As a motivational speaker, Kyle tailors his talks to fit his audience’s needs and has shared a stage with some of the world’s greatest minds, including leaders in sports, business, and innovation. He has, in his capacity as a speaker, worked with a number of Fortune 100 companies, e.g. Microsoft, Wells Fargo, Nationwide, Merril Lynch, Pfizer, and Bank of America.

“Know your limits, but never stop trying to break them.” – Kyle Maynard

Kyle Maynard "Kyle’s message of perseverance and strength was impactful. Everyone in the room – from age 6 to 60 – left with tremendous take-home value. As the event planner, I appreciated the efforts of Kyle and his tea, to understand our group. Kyle was gracious and approachable and I am sure he connected with everyone in attendance.” Ryan Wilkerson, Chapter Chair of Kansas City Young Presidents Organization
5 / 5
Kyle Maynard “Simply put, Kyle was amazing. He was so inspirational, his storytelling was spot-on and he managed to connect with everyone of all ages equally. Our partners couldn’t have been happier with the outcome!”Anup Swamy, VP Consumer Marketing, Sports Illustrated
5 / 5 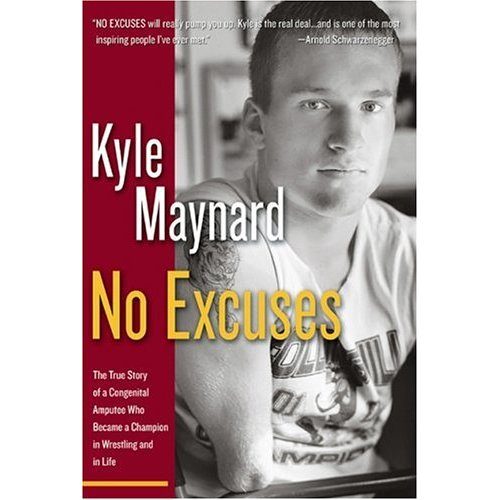