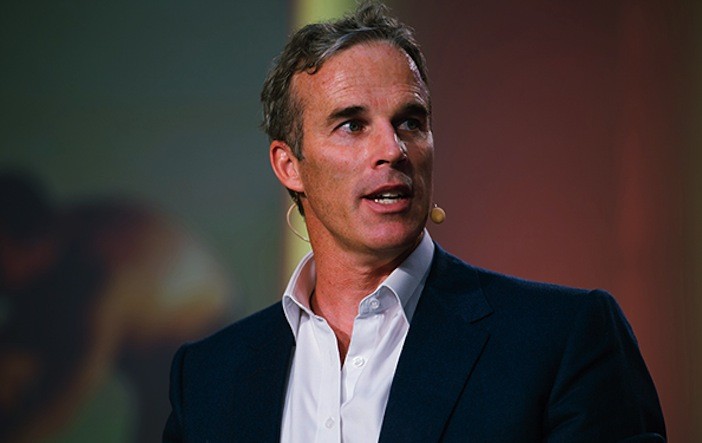 Lewis Pugh has over twenty years pioneered more swims around famous landmarks than any other swimmer in history.  The maritime lawyer is the only person to have completed a long distance swim in every ocean of the world. Through his swims he has had a unique perspective on climate change. Lewis has witnessed retreating glaciers, decreasing sea ice, coral bleaching, and the migration of animals to colder climates.

Speaking alongside Al Gore he has addressed the World Economic Forum in Davos. His background and range of speaking topics make him a highly sought after and interesting international speaker. Coca-Cola chose Lewis to give the keynote at their global 125th anniversary and Swiss Re similarly for their 150th anniversary. His leadership address at the Business Innovation Forum was voted one of the “7 Most Inspiring Videos on the Web”.

Many millions have viewed Lewis’s TED talks and countless others have followed him on BBC, Good Morning America, CNN, Jon Stewart, National Geographic, Sky News, Al Jazeera, Jay Leno and more. His autobiography “Achieving the Impossible” and recent book “21 Yaks and a Speedo” are both bestsellers.

“I believe that each and every one of us can do something to ensure that future generations enjoy the sight of polar bears and the security of a sustainable world.” – Lewis Pugh

Lewis is a leading figure in efforts to protect the oceans. His awards include France and South Africa’s highest honours, as well as the Freedom of the City of London. The World Economic Forum named him a Young Global Leader for his “potential to contribute to shaping the future of the world through inspiring leadership” and in 2013 the United Nations Environment Programme appointed him “Patron of the Oceans”.

The Ross Sea is situated off Antarctica and is the most pristine ecosystem left on earth. However, it is now facing rampant overfishing. The organisation responsible for protecting it is made up of 25 states. All the nations have agreed to set up a Marine Protected Area (akin to a National Park) except Russia and China.

Lewis undertook some of  toughest swims of his life to highlight the importance of this marine ecosystem and to urge Russia and China to come onboard. Afterwards he flew to Russia and met with the Russian Minister of Defence (who is the No. 2 official in Russia), the Governor of the Moscow Region and the former Minister of Sport. He had lengthy discussions which were warm and constructive. They were especially interested in discussing whether Antarctica could be used to find common ground between themselves and the UK/USA.

As Lewis says, “In 1959, at the height of the Cold War, Antarctica was set aside as a place for peace and science. If that could be achieved on land, could the same be done in the waters off Antarctica in 2015?”

Lewis Pugh “Lewis Pugh gave the perfect TED talk: a little bit of action, some thinking outside the box, humbling words on the need to respect nature, a happy ending. A Hollywood scriptwriter could not have structured it better.”The Financial Times
5 / 5
Lewis Pugh “Lewis is certainly one of the most exciting speakers I have heard. He is a brave and courageous leader who adds a fresh perspective to climate change.”Al Gore, Former Vice President of America
5 / 5
Lewis Pugh “Lewis’s speech was riveting and passionate. He’s stunning!” Archbishop Desmond Tutu, Nobel Peace Laureate 1984
5 / 5
Lewis Pugh “I cannot thank you enough for your speech at our Leadership Conference. It was absolutely remarkable and your message was a moving and emotional experience. The incredible scale of endeavour, the meticulous preparation, and the emotional magnitude, came through so crisply. Not only are your achievements so incredible and inspiring, but your ability to put them across in such a special way will no doubt have a lasting impact on our leadership team.”Adrian Gore CEO, Discovery Holdings
5 / 5
Lewis Pugh “Lewis tells a very inspiring and motivating story of achieving sporting excellence at it’s most extreme. I was blown away by it and at the same time saw real value in how we can all approach our challenges and reach our goals.”Gary Kirsten Former Head Coach, South African Cricket Team
5 / 5
Lewis Pugh “Your address was the perfect close to a conference centered around achievement and moving to the next level. The story you have to tell is incredibly unique and was delivered in such a professional and entertaining manner. Everyone was inspired by your extraordinary journey.”Colin Grassie CEO Deutsche Bank UK
5 / 5
Lewis Pugh “Lewis Pugh doesn’t tell us what to do, he shows us what can be done.”Bill Clinton 42nd President of the United States of America
5 / 5