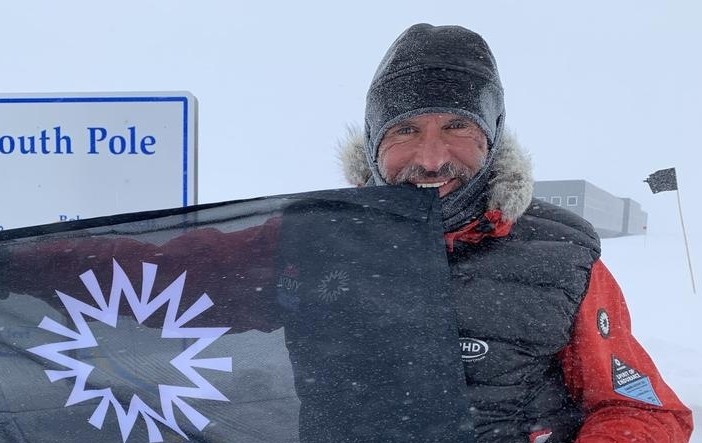 Louis Rudd was only 12 years old when waiting to be disciplined outside the headmaster’s office, he spotted a children’s book of Scott of the Antarctic. This sparked his spirit for adventure. Four years later, he joined the Royal Marines as a Commando, swiftly rising through the ranks to Regimental Sergeant before commissioning as an officer. After passing the SAS selection at the age of 22, he went on to spend 25 years in the Special Forces Unit.

His army career saw Louis Rudd serve in Northern Ireland, The Balkans, Iraq, and Afghanistan, as well as completing many tours in cold weather environments. His experiences in the Arctic Circle ignited his desire for Polar exploration.

Louis Rudd undertook his first Antarctic expedition with late polar explorer Henry Worsley in 2011. Together, they followed the route of the Norwegian explorer Roald Amundsen. The 67-day journey saw them travel 800 miles with no support. Despite suffering from frostbite and experiencing extreme temperatures, the severely underweight Louis Rudd was hooked. The lure of the Antarctic was irresistible.

In 2016, Louis Rudd led the SPEAR17 Expedition consisting of a team of five Army Reservists on a 1,100-mile, 67 days trip across the Antarctic. The expedition won many awards, amongst them the Millie for Inspiring others. He was awarded an MBE for his leadership during the journey in 2018.

May 2018 saw the explorer lead a team of five civilians on an east to west crossing of the Greenland Ice Sheet. They were hit by a hurricane that saw one team member get lost and another trapped inside a trapped tent. Although unable to stand in such strong winds, Louis Rudd managed, on hands and knees with a rope tied around his waist, to find and rescue the trapped man.

Despite these setbacks, the team, under Louis Rudd’s leadership, completed the crossing in 27 days.

In November of the same year, Louis Rudd undertook his Spirit of Endurance expedition. He is the first Brit and second person ever to cross the Antarctic solo, unsupported, and unassisted. Louis is also the first person to cross the continent twice.

Upon completion of the expedition, Louis Rudd completed a five-month schools programme on behalf of the Army. He spoke about his military career and life of adventure.

Louis Rudd received the Scientific Exploration Society’s ‘Explorer of the Year 2019’ for his solo Antarctic expedition.

As a speaker, Louis Rudd shares his stories of exploration, endurance, and resilience. He also shares his unique insights on leadership and collaboration, motivating his audiences to find and use their untapped potential.