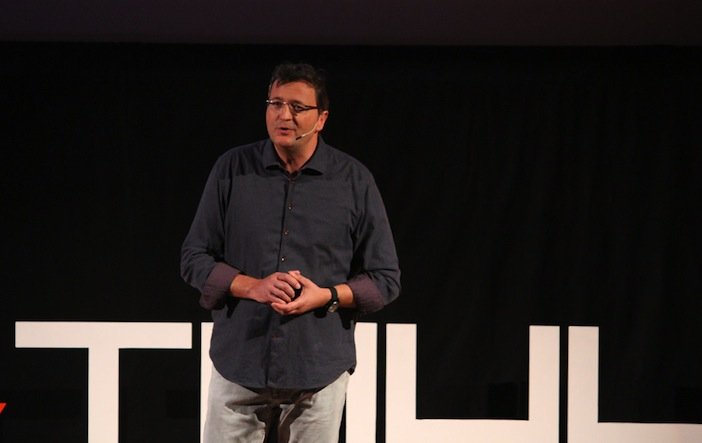 Marc Hauser is the first man to fly inside the jet stream and a motivational speaker who delivers to audiences an impulse speech about courage and motivation. He demonstrates using examples of his own challenges what with courage, inspiration and creativity is possible for anyone to achieve.

Marc is a world record-holder in extreme parachute jumping, he flew at 304 km/h over an entire city and is, therefore, the fastest person in horizontal free-fall. In July 2018 he became the first man to fly inside the jet stream.

As a conceptual artist, he sold the second most expensive picture at his first exhibition – without really being able to paint.

As an entrepreneur, he established the agency erfolgswelle® Ltd. as a leading agency in Europe – within just six months.

Hauser awakens new will power in his audience, he ignites the spark of their own implementation strength.
Whether extreme sports or business: The principle of reaching your goals remains the same. Hauser shares the secret of achieving great success. The outcome of Hauser’s presentations is fresh motivation and new courage with a long-term effect.

Successful self-management becomes tangible and motivates people to perform their own heroic deeds. The audience sees striving for happiness and success in an expanded context. Audience members take a big step forward in their personal quest for happiness in life. Participants receive an instrument that works easily and make achieving balance in life easier.

In a passionate speech, Marc Hauser reveals the background for his experience, substantiated with scientific insights. He depicts experiences in-depth and intensely. And everything is “seasoned” with a little Swiss charm and self-irony.

Keynote: The Hero-Maker Speech
As a world record holder in extreme skydiving, Marc serves as an example of how you can deal with your own fears. For originally, he had a fear of heights.

Breaking down borders, daring to do something new, and making progress are topics covered.
Knowing how to handle the setbacks that help us grow and two audience-interactive experiments on the topic of creativity and innovation are included. Hauser has a unique ability to draw almost 100% of audience participation and comforts even the most sceptical of attendees. Guests will see breathtaking pictures of the record parachute jump and a short video sequence in free fall.

Marc shows his audiences how purposeful naming of your own intentions can lead to success. As the owner of an international naming agency, he understands the effect when projects suddenly have names; it brings life into the project. Finally, the audience will play air-gold tennis, an inspiring poetic discipline that nobody knows about or anticipates.

Marc’s talk is full of information, emotion, infotainment and delivered with humour.

“The outcome is that audiences leave feeling like heroes, with fresh courage ready to seek out their own heroic deeds in everyday life.” – Marc Hauser

Real-life flying superhero, Marc Hauser, has been recognised by Guinness World Records for being the first person to skydive into the jet stream.

The Swiss adventurer performed his epic leap from a hot air balloon – diving out head-first into the jet stream without a wingsuit – 7.400m above Forbes, Australia on 30 June 2018.

Marc said: “I am thrilled to receive this globally recognised accolade. I have always wanted to be able to fly like a superhero – and today that is actually possible. I want to show that we really don’t need wings to fly.”

The jet stream is a fast-flowing, meandering air current circulating around the Earth which can reach wind speeds of up to 250mph.

A skydiving pioneer, Marc remains the only person to have free-flown into the jet stream and also holds the record for the fastest ever horizontal free-fall for a jump he completed in 2012.

What makes Marc’s world record, and his skydiving obsession, all the more astonishing is that he suffers from a fear of heights!

“There have been plenty of obstacles along the way,” he admitted. “But I have learned you need a little fear and a lot of courage to dream big, innovate, and achieve your goals. I’m determined to show people the bravery it takes to get from dreaming to doing.”

Hauser, whose motto is ‘free flight instead of free fall’ also believes the renewable energy within the jet stream could have huge potential for the world.

He added: “There are already a few start-ups innovating in the field and developing technology for high-altitude kites and wind turbines. I’ve been in the jet stream and if we could successfully harness just a small percentage of its potential, all the world’s energy needs could be met.”

The film has won 39 documentary film awards, including the London Independent Film Award and the Hollywood International Independent Documentary Award.

Marc Hauser gives keynote presentations across Europe. To book or enquire about Marc speaking at a conference or event please contact Promotivate Speakers Europe on +44 02078711829.

Marc Hauser "Motivating impulses custom-tailored to our topic. Clever content, authentic style, and a lot of humor. It fit just right!” Procter & Gamble
5 / 5
Marc Hauser "Thank you for your great speech!"Philipp Bodzenta, Director Public Affiars and Communications Central Europe, Coca-Cola
5 / 5
Marc Hauser “Thank you for your inspiring lecture at the HP Partner Forum. I would also like to thank you for the quality and the perfect presentation. The reaction was brilliant – the HP dealers gave you very good grades. You were the highlight of the event!" Hewlett-Packard, Europe
5 / 5
Marc Hauser "It was a pleasure having you as a keynote speaker. I did thoroughly enjoy the session."Standard Chartered Bank, Kuala Lumpur, Malaysia
5 / 5