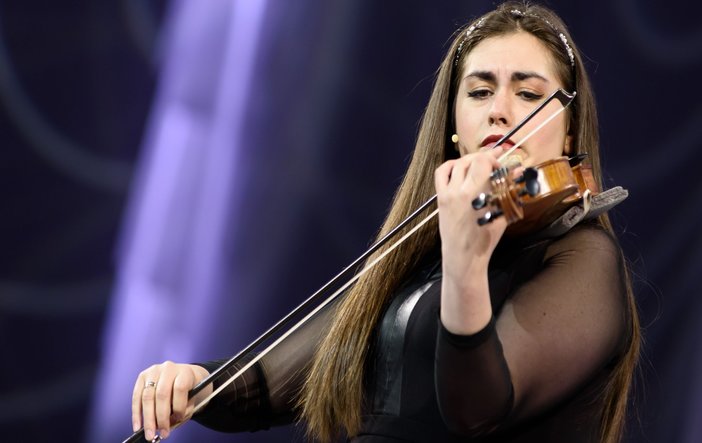 Named a “Champion of Change” by President Barack Obama, Mariela Shaker fled war-torn Syria and is making a life for herself in a new country.

Born in Aleppo, Syria, the Christian violinist was one of the many Syrian students who saw their dreams crumble when the country became a war zone. Having graduated in Business Administration, Mariela, a talented violinist, found herself dodging bombs and mortars in order to teach the violin at the Arabic Institute of Music. It was during this time that a video of her performing on the violin came to the attention of Monmouth College. With their help, Mariela was able to go the US on a student visa with a full scholarship to the college. After graduation, she received another scholarship, this time for the master of music program at DePaul University.

Since her arrival on American soil, Mariela has worked hard to achieve success in the music world as well as advocating for Syrian colleagues and friends who were not as lucky as her to escape the devastation of war.

Awards and Recognition include:

Mariela’s amazing story has received the attention of a number of publications, including the Chicago Tribune and The Washington Post.

”Your performance, as you’ve heard me say already, was just beautiful.  Quite extraordinary.  Mariela, you play every single note with your entire being.  We can see you feel the music from head to toe. Amazing! Thank you so very much for gracing us with your gifts.  It means so much to our team and to UNHCR as a whole to have you be part of what is a very momentous occasion for us. Thank you for always being so incredibly supportive.”

“I cannot thank you enough for your time and generosity on Monday night. The performance you gave was breathtaking and the stories you shared of your own experience as a refugee were an essential component to the evening’s success. Thank you for giving so generously of your time and talent.”  – Cate Blanchett

“Mariela, you brought us to tears with the beauty of your music and purpose. We are in awe and can’t thank you enough for such a beautiful, heartfelt performance at our Conference in Detroit. I hope you will let us know how we can be helpful in your journey and look forward to keeping in touch. You inspired so many. Thank you!”   – Tracy Hoover, CEO Chair, Points of Light

Mariela Shaker "What a truly wonderful performance you gave at the Hands Up for Syria event on Monday 9 May. Everything about it was perfect: your excellent selection of pieces; your tremendous musicality; and your very well-chosen words. Every Syrian in the room was proud to be represented by you and every non-Syrian had in you a tremendous example of how cultured, educated, skilled and charming the Syrian people are. Thank you so much for helping to make the evening such a success." Wafiq Said, Karim Rida Said Foundation
5 / 5
Mariela Shaker ''I was touched by your willingness to discuss a difficult and emotional topic with eloquent and grace. By doing so, you helped demonstrate how important it is for the United States to accept and help Syrian refugees. The United States has only begun to benefit from the talents you brought to our country.''US Senator Richard J. Durbinker
5 / 5