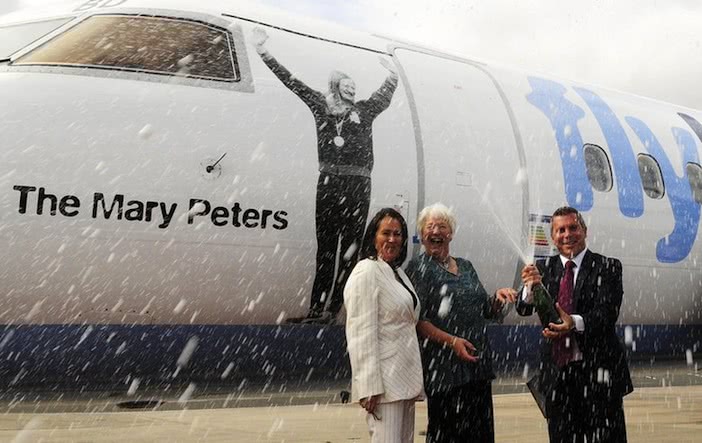 Dame Mary Peters is an Olympic legend who won gold in the pentathlon at the 1972 Olympic Games in Munich. Now Mary is a much admired and sought after speaker and ambassador for sport and to young people.

Most people assume Peters is Northern Irish. She is from Ulster but didn’t move there until she was 11 years old having been born in Lancashire in the North of England.

Mary was noted for  leaving no stone unturned in training putting in the necessary miles and hours required to become and remain a champion. Training in the backdrop of Northern Ireland’s Troubles Mary’s father improvised by building practice facilities including a large sand pit in their garden so that she could practice her jumping events.

Famed for her Olympic Gold in the 1972 Mary had other notable success in sport coming 4th in the 1964 Tokyo Olympics, 2nd in the shot pit at the Commonwealth Games in 1966, 9th in 1968 Olympics and winning gold in the Commonwealth pentathlon in 1970 and ’74.

“Northern Ireland has taken a lot of knocks over the years and I think it’s one of the nicest places in the world.” –  Mary Peters

Mary’s triumph in the ’72 Olympics would be overshadowed the next day when 11 Israeli athletes and officials were murdered by Palestinian terrorists.

In recognition of her services to sport and to the community in Northern Ireland Mary was awarded an MBE by the Queen in 1973 and  latterly a Damehood in 2000. She is a Freeman of Belfast and Lisburn  and remains a very popular and much admired figure in Northern Ireland and the UK.

Throughout her career Mary was always conscious of putting something back into sport. Having won Olympic Gold she used her fame to raise money to refurbish the Queen’s University athletic’s track to make in of international standard. It was renamed in her honour. Mary continues to work at the top levels of UK sport and runs a trust to support and encourage young people in Northern Ireland to follow in her own footsteps.

Mary has widened her experience lecturing internationally on fitness, motivation and women in sport and on behalf of many corporate bodies.

Mary Peters on why she was especially happy to win Gold; "Northern Ireland has taken a lot of knocks over the years and I think it's one of the nicest places in the world." Mary Peters ...
5 / 5