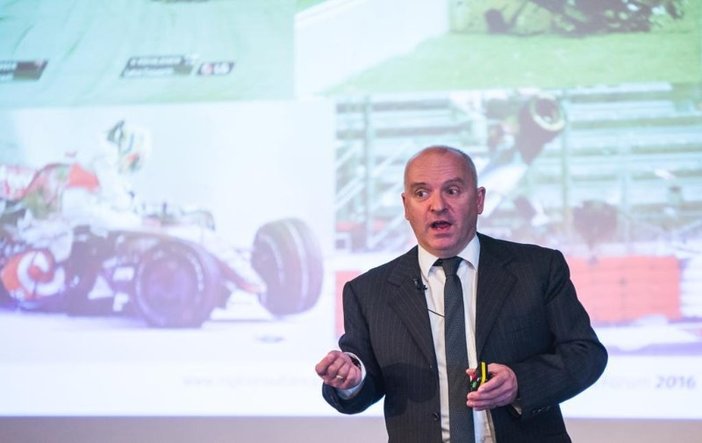 The name Mike Gascoyne has become synonymous with Formula 1 racing. As such, he is one of the most renowned car engineering experts in the industry with a wealth of experience in top-level management. He has also been at the pinnacle of international Motorsport for over twenty years.

Mike’s interest in motorsport started at a young age, with the 1980’s seeing him study towards his Ph.D. in fluid dynamics at Cambridge University. The latter part of this decade saw Mike Gascoyne join the world of Formula 1 motorsport when he joined McLaren. Since then, he has worked with a variety of top racing teams, including Jordan, Sauber, Renault, Tyrrell, Force India, Toyota, and the Caterham Group.

An adventurer since a young age, Mike led expeditions to the Alps and Himalayas while a student. He also raced Formula 1 cars in the Boss Series. This was in the late 90’s. But besides motorsports, Mike Gascoyne’s other passion is sailing.

Mike Gascoyne has been involved in professional sailing for quite some time. In 2012, he did a solo crossing of the Atlantic on a class 40 racing yacht, and in the next year, competed in the Transat Jacques Vabres race. It is his passion for his sport that makes him determined to bring F1 standards of technology and logistics to off-shore training, all the while encouraging green, sustainable, and reusable energy sources to the marine, automotive, and aerospace sectors. This he aims to accomplish by means of his extensive experience in engineering, competitive sailing, and sports marketing. To this end, Mike founded MGI, a professional and dynamic engineering consultancy.

Besides his racing pursuits, both on land and sea, Mike has been the technical pundit for the BBC 1 coverage on live TV and radio and is one of the most sought-after personalities in the pit lane for media work. He was also engaged as the keynote speaker for the 2014 World Yacht Racing Forum in Barcelona and the 2015 IOT show in Singapore.

As a speaker, Mike Gascoyne has addressed various audiences, both in the world of business, international motorsport, and global sponsor events. He has also lectured at numerous universities, both at home in the UK and abroad.

Mike Gascoyne “I would just like to personally thank you for your involvement in the event yesterday. Most people don’t get to hear that honesty as too often the conversation feels scripted.” Peter Jones, Black Book Motorsport Forum
5 / 5
Mike Gascoyne “During the period of the sponsorship of the Caterham F1 team by Dell, Mike has proved an essential part in getting the technical elements of the relationship across to our top customers and also to give unparalleled insight into the larger technical issues of Formula 1. Not only was he able to explain clearly some of the nuances of the technical regulations to a broad audience but also, due to his extensive experience from many years in the sport was able to entertain the audience with anecdotes about cars, teams and drivers from the past. I have worked for nearly twenty years in and around Formula 1 and I found that I learned something new after every talk I was lucky to attend.” Richard St. Clair-Quentin, DELL
5 / 5
Mike Gascoyne “We invited Mike to join us for the official launch of Caterham Cars’ flagship new showroom, not only did he have the obvious link to Caterham through his time working in the Caterham Group but we also knew that our customers would know and recognise Mike from his many years in Formula 1. Ultimately we knew that he would be a draw to help us get people along for the day, as they would be interested to hear Mike speak about his experiences of the most glamorous sport in the world. Thankfully, he didn’t disappoint, Mike entertained and educated our packed showroom with a series of well told amusing anecdotes and detailed insights into the mystical world of Formula 1. Clearly his technical knowledge is vast and it was fascinating to hear his views on how F1 is developing and how it needs to change. Mike was a very amiable, confident and polished speaker, I would have no hesitation in using him again or indeed recommending him to others.” David Ridley, Caterham Cars
5 / 5
Mike Gascoyne “The engineering performance challenges in Formula 1 bear a striking resemblance to those facing our clients in asset intensive industries today. Mike Gascoyne gave a clear parallel view of our industry and a glimpse of where it’s heading: predictable machine reliability is not only mandatory in winning a race, it determines whether you are able to compete at all. Mike’s passion, honesty, edgy imagery and compelling delivery were a great addition to our stage, and we hope to invite Mike back soon to share more insights from his accelerated world of high-performance engineering. Highly recommended!”Hady Onk, Vice President Operations and Professional Services, Meridium, from GE Digitial
5 / 5