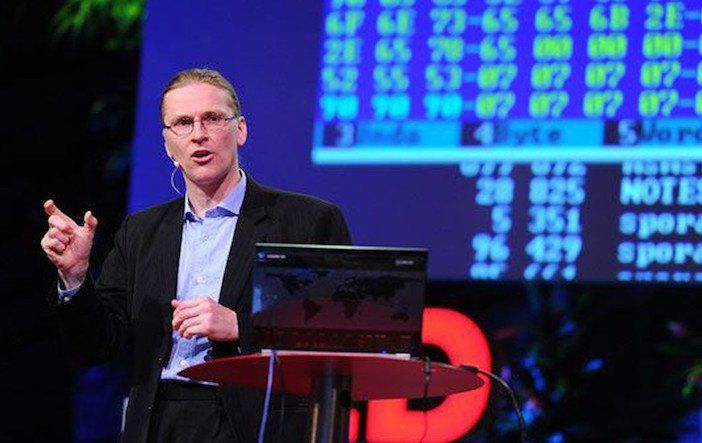 Mikko Hypponen is a worldwide authority on computer security. He hunts hackers for a living. He has written about his research for the New York Times, Wired and Scientific American and lectured at the universities of Oxford, Stanford and Cambridge.

At a time when computer security is at the forefront of international business and politics, Mikko’s experience is highly sought after.

Hyppönen has been listed on Foreign Policy Magazine’s Top 100 Global Thinkers list. His TED Talk has delivered the most watched online security talk on the internet, seen by 1.5 million people and translated to 40 languages. He works as the Chief Research Officer of F-Secure.

Mikko Hyppönen is a world-wide authority on computer security and privacy issues. He has 20 years of experience in public speaking, private briefings and keynotes. He is available for speaking engagements worldwide.

Mikko has delivered hundreds of talks in over 40 countries over the last 20 years, including keynotes in the most important security conferences. In 2010, he was awarded the Virus Bulletin Award as the best educator in the industry.

He has keynoted at events like TEDGlobal in Edinburgh, EDIST in Toronto, DLD in Münich, Forum the la Haute Horlogerie in Lausanne, and various IDC events. His other speaking clients include SXSW, DLD, Google Zeitgeist, MWC, CeBIT, several oil & gas companies in the Middle East and banks in Europe and in South Africa.

Mikko has also addressed the EU Parliament on privacy topics and lectured at the Universities of Stanford, Oxford and Cambridge

Mikko Hyppönen is an expert and leading conference speaker on internet security and cybercrime. To book or check availability for Mikko to speak at an event or to an organisation please contact PROMOTIVATE™ Speakers Agency at ask@pro-motivate.com

Mikko Hypponen "Mikko made us think and he made us laugh. As a speaker, he was very knowledgeable and inspirational. He made us hope that the talk wouldn't end just yet!"Emilia Häyrynen —MS
5 / 5
Mikko Hypponen "Mikko exhibits a remarkable capacity to make complex technical concepts easy to understand, uncoupling the relevant from the mere buzz, and bringing notable anecdotes and first-hand accounts to his storytelling."Bruno Giussani — European director, TED
5 / 5
Mikko Hypponen "We organized an event where Mikko made a presentation to a diverse group of 400 senior executives. He was extremely engaging and informative. His presentation was a nice blend of the latest facts and informed predictions delivered in an entertaining style. I would highly recommend Mikko for an enlightening look at the latest trends on cybersecurity."Michael Wade — Professor of Innovation and Strategy, IMD Business School, Lausanne, Switzerland
5 / 5