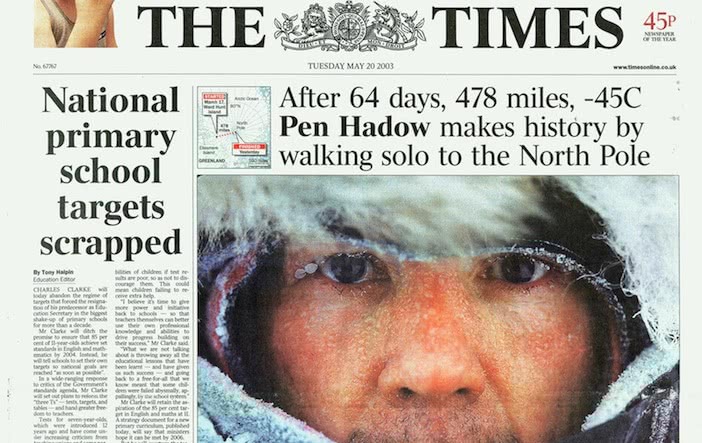 Pen Hadow is a leading explorer of the Arctic Ocean, and is now dedicated to the United Nations process that will advance protection for the wildlife and ecosystem in the international waters around the North Pole.

Hadow leads the not-for-profit 90ºNorth Unit which advocates for an international agreement to create a protected area for the international waters of the Arctic Ocean; and he is director of the annual scientific research and public engagement programme, Arctic Mission, which supports the Unit’s work.

The 90º North Unit is introducing a significant new perspective on the Arctic’s diminishing sea ice, revealing that the environmental issue is less about the geophysics of a melting layer of frozen seawater and far more about the potentially catastrophic loss of a globally unique “floating ice-reef ecosystem” which includes some of the world’s most iconic species.

In 2017 Arctic Mission sailed two 50’ yachts into the North Pole’s international waters, the first non-icebreaking vessels in history to do so, to demonstrate the increasing accessibility of these waters to surface commercial shipping, fishing, tourism and mining, and therefore the emerging human threat to the wildlife already stressed by its reduced sea-ice cover habitat.

In 2003 Hadow became the first person to trek solo, and without resupply, across the sea ice from Canada to the North Geographic Pole – a feat unrepeated to date, that took three attempts over 15 years to achieve. He is also the first Briton, without resupply, to both the North and South Geographic Poles from their respective continental coastlines.

Pen Hadow ‘Clients were blown away by his achievements.’ Coutts Bank
5 / 5
Pen Hadow ‘Pen was amazing, just amazing, richard was extremely impressed with his presentation and Pen himself. I thought he was utterly charming and a real gentleman, he was an outstanding speaker and we have received many compliments on his presentation. It was a real pleasure to meet him. Thank you both so much.’Tracey Fletcher, Wragge Lawrence Graham & Co
5 / 5
Pen Hadow ‘Pen Hadow’s experience was genuinely inspirational and motivating. Having launched Marks and Spencer’s Plan A initiative on the need to tackle the enormous challenge of climate change, it was fantastic to hear from someone who has experienced global warming issues with their own eyes.’ Stuart Rose, CEO, Marks and Spencer
5 / 5
Pen Hadow “The session that you delivered to the Elite Coaches was exactly what we were looking for and more" UK Sport
5 / 5

Famed Spanish Mountaineer; the first to conquer Everest in the 1996 disaster, media personality, author, and model