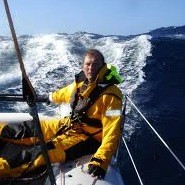 He has raced in seven transatlantic and two round-the-world races sailing over 330,000 nautical miles. He advocates that the are four consistent components to each his challenges which are (i) innovation (ii) technology (iii) challenge and (iv) adventure.

He is most noted for unselfishly risking his own life by turning around to rescue French sailor Raphael Dinelli who was in difficulty in a fierce hurricane in the Southern Ocean.  For his courage he was awarded the Legion d’Honneur and an MBE and voted World Sailor of the Year.

The lessons Pete has learned enable him to offer expertise as a speaker to companies on leadership, team building and achieving what previously would have been thought impossible.  His book ‘Close to the Wind’ is a best seller.

Pete is in high demand as a lecturer at business schools; he is an Associate Fellow of Said Business School at Oxford University.

He has recently recreated the voyage of the smallest migrant vessel to make it to Australia 150 years ago. Rowing out of harbour and navigating by the stars, his crew faced many challenges including a ferocious Southern Ocean storm that rolled them upside-down and broke a crewman’s leg.

Pete circumnavigated Tasmania by sea kayak; with limited communication he was exposed once again to the Southern Ocean and the notorious Bass Strait.

Teamwork and preparation are the mainstays of Pete’s successful career as a yachtsman. He is well known for training and motivating teams to overcome even the toughest of conditions.

It doesn’t always go to plan. Pete led a team of over 100 employees over 5 years with a £multi-million pound sponsorship deal to try to break the trans-Atlantic ocean world record. A freak storm ended their challenge. Handling these complex and often conflicting pressures, gave Pete a unique insight into the challenges that face every organisation.

He has led 15 projects from circumnavigating the globe to reaching the North Pole by foot. He is a strong natural speaker who draws on his very interesting experiences to bring relevance to individuals and organisations world-wide.

Pete Goss "Pete was simply one of the most inspirational speakers we’ve ever had, and his messages about the importance of teamwork and innovation were very relevant for our business. He’s a great story teller, and an incredibly humble and likeable guy. The feedback from our event was overwhelmingly positive about him and his message, so I’d strongly recommend him."  BT Retail
5 / 5
Pete Goss “Pete’s presentation, like the oceans he has sailed, has an underlying calm, while on the surface the audience are hit with waves of ideas, advice and emotions that leave a lasting and valuable impression in the business world. An amazing speaker.” ICAP plc
5 / 5
Pete Goss “I have to say that Pete’s presentation was absolutely first class, his presentation skills were spot on, mixed with a sense of life experiences, challenges and real business issues that he has overcome during his obviously challenging career. I am pleased to say that everyone in my audience has remarked at how impressed they were with his presentation and that it put a lot of the issues that my business is facing, into context and how uplifted they felt after his presentation.”Avaya UK
5 / 5