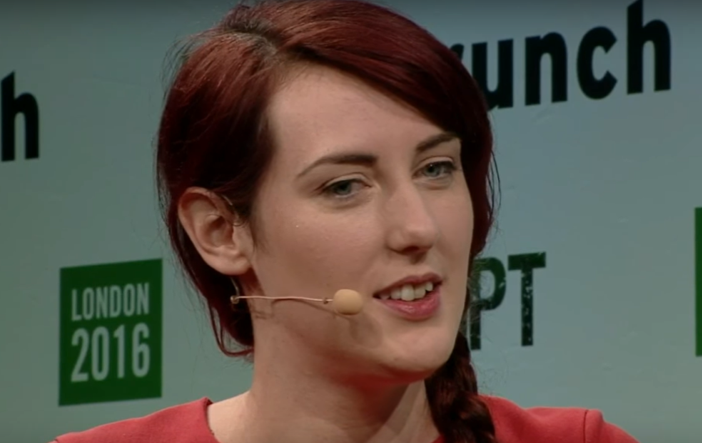 In 2014 Samantha Payne co-founded Open Bionics with the aim to create low-cost bionic hands that look and feel good. Together with her partner, they focused and perfected the business profile, model, network and raising rounds before pitching the company at the Finals of Intel’s Global Make it Wearable challenge in 2014. With over four-hundred entrants, Samantha and her partner came second taking home a cash prize of £250,000.

Open Bionics works with companies like Disney and Edios-Montreal to turn science fiction into reality. The startup builds affordable assistive technologies that enhance the human body. Open Bionics has won the global Robotics & AI for Good award, the James Dyson award for innovative engineering and two British Engineering Excellence awards. Samantha has been recognised as an entrepreneur to watch by Forbes30under30, Bloomberg, and Fast Company. Samantha’s company brings science fiction to life.

Samantha Payne was named one of the top 25 women in robotics you need to know about by Robohub and Marie Claire’s Top Women in Tech. She also made the shortlist for the Entrepreneur of the Year Award. Her business has been named one of the top 50 robotic businesses in the world alongside Google and Amazon.

Samantha Payne has won numerous international awards for her work. Amongst these, she includes the MIT Technology Review ‘Innovators Under 35’ in 2018 and Wired Innovation Fellow in 2016.

Samantha lives in the UK and presents in English.

Samantha Payne “I had the great pleasure of teaching and coaching Samantha and the Open Bionics Team during Intel's Make it Wearable Challenge (makeit.intel.com), where Open Bionics wowed the judges and took home the $250,000 second prize. Samantha is a talented and confident yet coachable professional. She will be an asset to every team she joins throughout her career.”Mark Searle, Entrepreneur, Executive Leader, Innovation Instructor, Keynote Speaker, Contributing Author
5 / 5
Samantha Payne “I first witnessed Samantha's working processes and practice at KWMC, where I was struck by her enthusiasm and commitment, but also her creativity and insight. Sammy has a remarkable set of skills, but she also has a vision, based on solid principles, which steer her application of those skills. She applies herself to work that she feels passionately about and which will make a positive difference to the lives of others. She does this in innovative ways, coming up with strategic ideas about how to apply creative uses of new media, for example, in order to bring about positive social change. Based on her work at KWMC I invited Sammy to give a presentation to a group of young people I work with at Tate Modern, form the PHF funded Circuit programme, about the possible ways in which they might use creative applications of new media in their evaluation processes. Sammy prepared an excellent presentation which inspired the group to produce their own data visualisations. Sammy supported them to do this following her presentation and enthused the group, leading them to produce some excellent pieces of work.”Roz Stewart-Hall, Nurturing creative, inclusive evaluation processes, to support arts organisations to make positive differences
5 / 5
Samantha Payne “Sammy is a really hardworking, ambitious young woman who is reliable, responsible and a good team leader. In her role as Junior Digital Producer at KWMC, she has demonstrated skills as a web developer, photographer and social media campaigner. She would be an asset to any company.”Noomi Yates, Director at Freelance
5 / 5
Samantha Payne ‘Samantha approached me with some great ideas for stories for the Bristol Post Business section. I don't normally take speculative submissions but was impressed enough to make an exception. She has since written a number of pieces around Bristol's growing tech industry. Samantha writes well, has great passion for the subject and the ability to capture the people and energy of the story. I have also recently worked with Samantha as a speaker at an event she curated, which was well run and a great success.’ Gavin Thompson, Deputy editor at Insider Media. Award winning journalist and former newspaper editor. Director of Bath BID.
5 / 5