Italian professional basketball coach Sergio Scariolo is the Spanish national team head coach and coach to Virtus Bologna of the Italian Lega Basket Serie A. His coaching has seen the senior Spanish national team win their EuroBasket championship and a World Cup. He is regarded as one of the most successful coaches in the history of international competitions.

After he was appointed head coach of Pesaro in 1989, the team, under his tutelage, went on to win an Italian league win in the national finals. At only 29 years of age, Sergio Scariolo was one of the youngest Italian coaches in the game’s history to attain this feat. The team also reached the FIBA Korać Cup Final in the same year. The 1990-1991 season, however, saw the club placed seventh in the season, although they managed to make the European Championship Club Final Four.

The next season saw Sergio Scariolo change clubs, coaching the Italian second division team Aurora Deseio before his hire by Fortitudo Bologna, an upcoming ambitious team. He was the recipient of the Coach of the Year Award of the Italian Serie A for his sterling efforts in 1994. A few years later, the team reached the national finals for the first time in the club’s history.

Moving to Spain to coach TAU Vittorio in 1997, Sergio Scariolo managed to help the team reach their first Spanish Championship final in 1998, going on to win the Spanish King’s Cup in 1999. Hired by Real Madrid the same year, he led the team to win the Spanish National League. They also reached the EuroLeague’s quarterfinals.

The period 2003 to 2008 saw the intrepid coach as head of the Spanish club Unicaja Málaga. The club, under his tenure, lived what they term its ‘golden age’. For example, they won the Spanish King’s Cup in 2005, their first-ever Spanish League championship, and finished in their best league position to date. They also qualified for the 2—7 EuroLeague Final Four and defeated the NBA’s Memphis Grizzlies in a friendly match in 2007. It was one of the very few times any NBA team lost to a foreign club.

Sergio Scariolo did a stint coaching in Russia from 2008 to 1010, before returning to Italy as the head coach of Laboral Kutza. In 2018, however, he became the assistant coach of the NBA’s Toronto Raptors. His efforts helped the team win their first NBA championship. He was the first Italian coach, and second Italian ever, to manage this feat. Because of ill health on the part of the team’s head coach, he became the interim head coach in 2011 and led the team to a victory over the Houston Rockets.

In June 2021, Sergio Scariolo returned to Italy. He was employed as the Virtus Bologna head coach of the Italian Basketball League A Series. The same year saw the team win their second Supercup ever.

On a national level, Sergio Scariolo served as the Spanish national team’s head coach twice. The team, under his command, won the gold medal at EuroBasket 2009, 2011, and 2015. They are also the recipients of the 2012 Summer Olympics silver medal, and a bronze during the 2016 Summer Olympics. He also coached the national Spanish team at the 2010 FIBA World Championship and led them to victory at the 2019 FIBA Basketball World Cup.

As a speaker, Sergio Scariolo takes you on a journey about the importance of leadership, teamwork, communication, inspiration, and motivation to ensure peak performance in a winning team. He encapsulates many of his beliefs in his two published works ‘All-Round Man’ and ‘Speaking in Silver: The Reasons of a Coach’.  He lives in Spain and speaks Italian and Spanish. 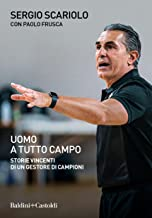