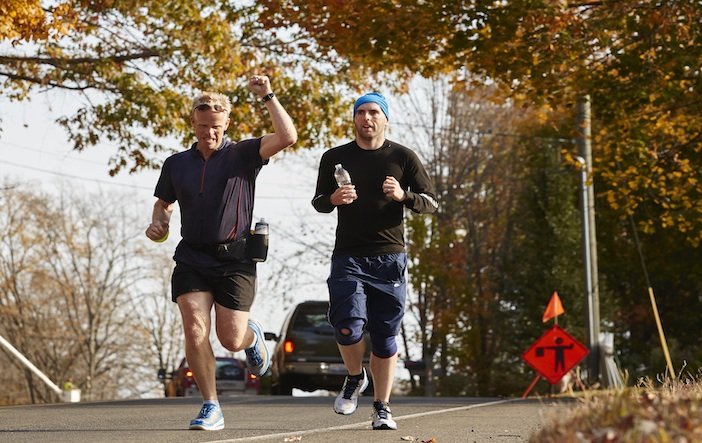 Simon Wheatcroft was born with the genetic eye disorder Retinitis Pigmentosa (RP) resulting in Simon becoming blind at the age of 17. After a number of difficult years of adaptation Simon headed to California with an idea. To climb a mountain, Simon had never climbed or even hiked up a mountain before but how hard could it be?

It turns out climbing a mountain with zero experience and zero sight is indeed difficult! For the first time in his life Simon quit because he couldn’t see. It wasn’t the difficulty of the mountain, it was Simon’s lack of vision that defeated him on that day.

Returning to the UK Simon vowed never to quit again because he was unable to see. Now all he needed was a challenge? How hard could it be to learn to run solo outdoors when you are blind? Once you have achieved that how far can you run? Can you go further? Harder? Lets make it a true challenge!

Simon began a truly remarkable journey of adapting technology to achieve what once seemed impossible. Training outdoors solo on the open road. Partnering with leading tech firms and connecting with hundreds of people around the world Simon has achieved incredible goals. Competing in numerous ultra marathons and even running his first ever marathon – NYC 2014. But if you are going to run such a marathon why not start in Boston, run all the way to NYC, after all its about the adventure!

Simon is always looking for new technology to adapt to achieve evan grander adventures. But what if the technology doesn’t exist yet? You make it. Leveraging his experience with working with leading tech firms and institutions such as Google, IBM and MIT, Simon is creating the next generation of technology that will continue to enable himself and others to achieve the impossible.

Simon Wheatcroft "Simon gave a powerful talk at last year’s WIRED event. He then straight away went to the States to run from Boston to NY. He inspires people as Mark Pollock does."David Rowan - Editor WIRED Magazine
5 / 5
Simon Wheatcroft “I can honestly say that Simon is one of the most inspiring speakers we have ever had at our events, and we’ve been doing this for 15 years with the likes of Bill Gates and Stephen Fry on stage. Simon tell his incredible story of determination and endurance using new technologies to enable him to do more and go even further.” IAB
5 / 5
Simon Wheatcroft "I first saw Simon when he was the top rated speaker at the IAB conference in 2014. He subsequently came and spoke to the UK Twitter team. The talk was informal, warm and deeply inspiring. Simon has a perspective on life, technology and - yes - running that is captivating to hear". Bruce Daisley, MD Twitter UK
5 / 5
Simon Wheatcroft “We invited Simon to speak out our annual UK & Ireland conference. His amazing journey and experiences truly inspired the team and made them think more deeply about their own untapped inner strengths. Simon delivered his speech with great humility and humor that only made it more powerful and resonate more strongly with the audience. I wouldn’t hesitate in recommending Simon as a motivational speaker”Ed Couchman, Facebook
5 / 5
Simon Wheatcroft "Simon spoke at Google's flagship Think Performance conference for C-level execs and simply stole the show with his moving and memorable stories of how advances in tech, specifically smartphones and now Google Glass, allows him to achieve his extraordinary goals." Matt Brocklehurst, Product Marketing, Google
5 / 5