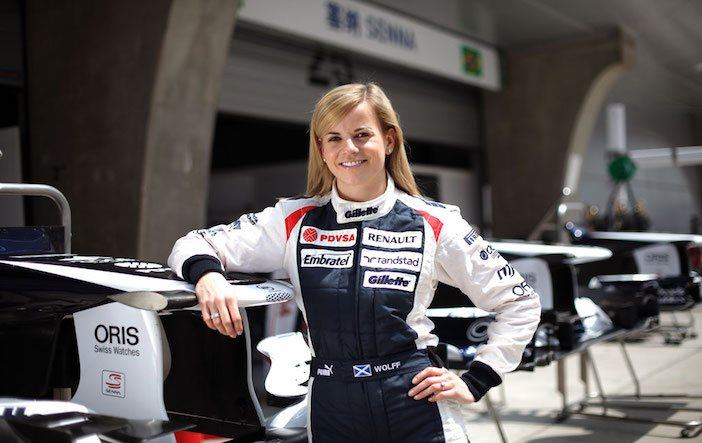 Susie Wolff has come a long way in racing after starting out in karting at a young age.

Her parents, who owned a motorcycle shop in Scotland, took her to different racetracks on weekends, instilling in her a passion for racing. She started racing karts at the tender age of only eight years.

Her professional career started with the Formula Renault UK Championship, where she notched three podiums. During this period, she was also nominated for the British Young Driver of the Year Award on two occasions.

A brief spell in Formula 3 racing saw Susie Wolff go on to make her name with Mercedes-Benz in DTM, the German Touring Car Championship between 2006 and 1012. From there, Susie moved onto Formula 1 after being signed by Williams. The rest is racing history.

Susie started out as the team’s development driver, moving up to the position of test driver for the 2015 season. The 2014 British Grand Prix saw her make history when she became the first woman driver to take part in a Formula One race weekend in twenty-two years.

2016 saw Susie Wolff launch Dare To Be Different, an initiative in collaboration with the UK Motorsport Governing Body, the Motor Sports Association. Its aim is to drive female talent within predominantly male-dominated industries.

Amongst her wide range of achievements, Susie is the main Ambassador for Mercedes, Diversity Ambassador for UBS, and in 2016 was the Formula 1 Analyst for Channel Four Television. She lives in Ermatingen, Switzerland, with her husband Toto Wolff, executive director of the Mercedes AMG Petronas Formula One Team.

Susie serves as a true role model for women trying to make headway in professions predominantly dominated by men. A German – English bilingual, she is an accomplished public speaker, and regularly booked with companies such as Mercedes-Benz AMG, Randstad, Deutsche Post, and UBS.

Childhood saw her either behind the wheel of a racing car or taking part in public speaking competitions. Susie speaks at various conferences and is a participant in panel discussions.

Susie resides in and travels from Switzerland. Book or check the availability of Susie Wolff by contacting PROMOTIVATE™ Speakers Agency Europe at ask@pro-motivate.com

Susie Wolff “Very good way to come across, good energy, humble, smart to make all topics very relevant for the audience. Engaging and fun overall”Guest, UBS
5 / 5
Susie Wolff “Susie Wolff was really very inspirational. She has engaged our audience and was one of the favourite speakers and topic of the day” Accenture Event
5 / 5
Susie Wolff “I’ve had the privilege of working with Susie Wolff for an executive event that our company has organized, In that time I have known Susie to be a personable, enthusiastic and a brilliant business woman and driver. Susie has built a strong reputation as someone with vision, diligence, and technical knowledge and I am thrilled I had the chance to experience seeing Susie implement these skills outside the race track. I found her speech at our conference to be incredibly valuable and educational, and so did the diverse group of automotive executive visiting our event. I strongly recommend Susie to anyone looking for a motivational or business speaker.”Manuela Papadopol, Elektrobit Automotive
5 / 5
Susie Wolff “She is very eloquent person and her stories are exciting and captivating. Susie Wolff represents her views very committed and is a true professional” UBS
5 / 5