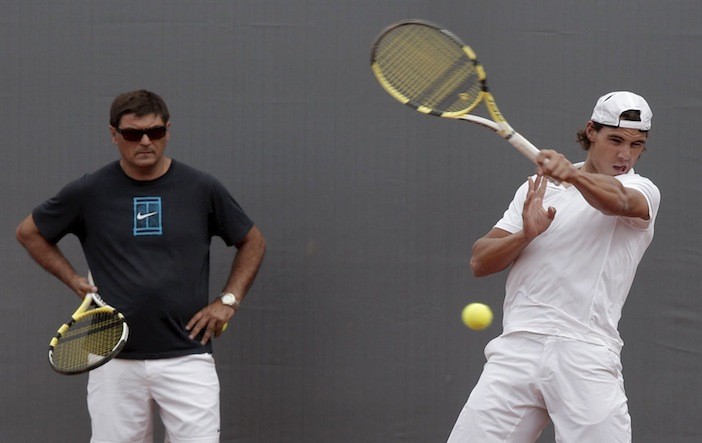 Toni Nadal is known around the world as coach and uncle to Rafa Nadal one of the world’s greatest ever tennis professionals.

Toni lives with the rest of the Nadal family in Manacor, Mallorca. His brother is Sebastian Rafa’s father and his other brother Miguel Angel is a former Mallorca, Barcelona and Spanish national football team player.

Passionate about tennis he played tennis at a young age becoming a professional and coaching a number of Spain’s leading juniors. He introduced tennis to Rafa at the age of four. At age twelve Toni would be responsible for steering Rafa towards tennis and away from his other love and talent, football.

For fifteen years Toni has been Rafael Nadal’s tennis coach responsible for all technical aspects of his game and his legendary mental approach. Rafa’s exemplary on-court manners and refusal to blame his occasional defeats on anything but his opponent’s success are noted to Uncle Toni. Rafa Nadal is renowned for never giving up and opponents know this. Toni has drilled into him better than any other player on the circuit to look forwards to the opportunity of winning the next point, no matter how badly the previous point might have gone.

Creating the mental and physical toughness that Rafa Nadal exudes has its roots in Toni’s training methods. Toni trained Rafael on poor courts with bad tennis balls, just to teach Rafael that winning or losing is not about the quality of courts, strings, lights or balls but that it is about attitude, discipline and perspective.

His philosophy is that you can only achieve something with hard work and that there is always room for improvement. Toni Nadal tries to develop character in Rafael because he knows that it could have a profound impact on results and motivation. The results Rafa Nadal has achieved working with Uncle Toni are astounding and amongst the greatest ever in-house family coach-player working relationships. Rafa has to date amassed 21 Grand Slam titles and is widely known as the King of Clay by the media having won the French Open 13 times. Toni Nadal wears the cap of his sponsors Iberostar Hotels & Resorts. He collaborates with Iberostar Foundation in order to help the social integration of children and disabled children from the Balearic Islands.

Toni Nadal is undoubtedly one of the world’s leading sports coaches. Many organisations and leaders can benefit from an insight into his management skills, motivation, teamwork and structure that have been so successful in taking Rafa to become one of the world’s greatest sports professionals and role models.  Toni also likes to talk about the value of sport in everyday life and for a better society.

Toni states unequivocally, “Even if the world is finished tomorrow, I do the right thing—that’s values. Values affect everyone and everything in the world.”

Based on this perspective, he sought to create a model of the six core values most important for players and everyone.

1. Humility
The value of humility is very commonly taught in Spanish tennis, as he discussed in his book, The Secrets of Spanish Tennis. Humility can be exemplified by champions like Nadal, Carlos Moya and Juan Carlos Ferrero. “Humble is the way you have to be, period,” “Everybody should know their place in the world. The point is that the world is quite big enough already without you imagining that you’re big too.”

Rafa himself has argued that humility is a key component of his motivation and competitiveness because his humility never allows him to overestimate an opponent and become complacent going into battle.

2. Overcoming obstacles
Toni believes that in life, in general, having the perseverance to overcome obstacles is a very important value and overcoming challenges is what helps to build a strong character.

3. Respect
“Respect for other people, for everyone irrespective of who they might be or what they might do, is the starting point of everything,” “What is not acceptable is that people who have had it all in life should behave coarsely with other people. No, the higher you are, the greater your duty to treat people with respect.”

Furthermore, Toni believes that if you respect others, you will be happier in life, and thus happier on the difficult journey towards becoming better person.

4. Patience
Patience is a common value taught. For Toni, one must, of course, be patient in the court to develop one’s strategy. Moreover though, in life, one must never become impatient on the long and difficult journey towards achieving greatness; patience is thus interlinked with persistence.

5. Tolerance
Tolerance, for Toni, is connected to the value of respect. For Toni, people in life who have a high tolerance of those around them are more respectful and peaceful, and thus happier in their life. Tolerance, in this case, means how we can handle the stress and mental/emotional challenges of the battle. Strong players are able to tolerate more stress and pressure than weaker players. Therefore, tolerance is also interwoven with the concept of self-control. Toni says, “Self-control is critical to becoming a champion. A player must control their mind, body and emotions. Without this, he cannot control the ball.”

6. Fighting spirit
The fighting spirit means being willing to “suffer”. Sometimes he calls it “enduring.” Toni believes champions must endure and suffer—they must fight to the end to achieve greatness. Rafa says, Toni taught me, “Endure, put up with whatever comes your way, learn to overcome weakness and pain, push yourself to the breaking point, but never cave in. If you don’t learn that lesson, you’ll never succeed as an elite athlete.”

“These six core values are the infrastructure around which one can build a person’s mind and spirit, one that dominates without making excuses.

We must find solutions, not excuses. Whining and complaining never helped us win a match or championship.”