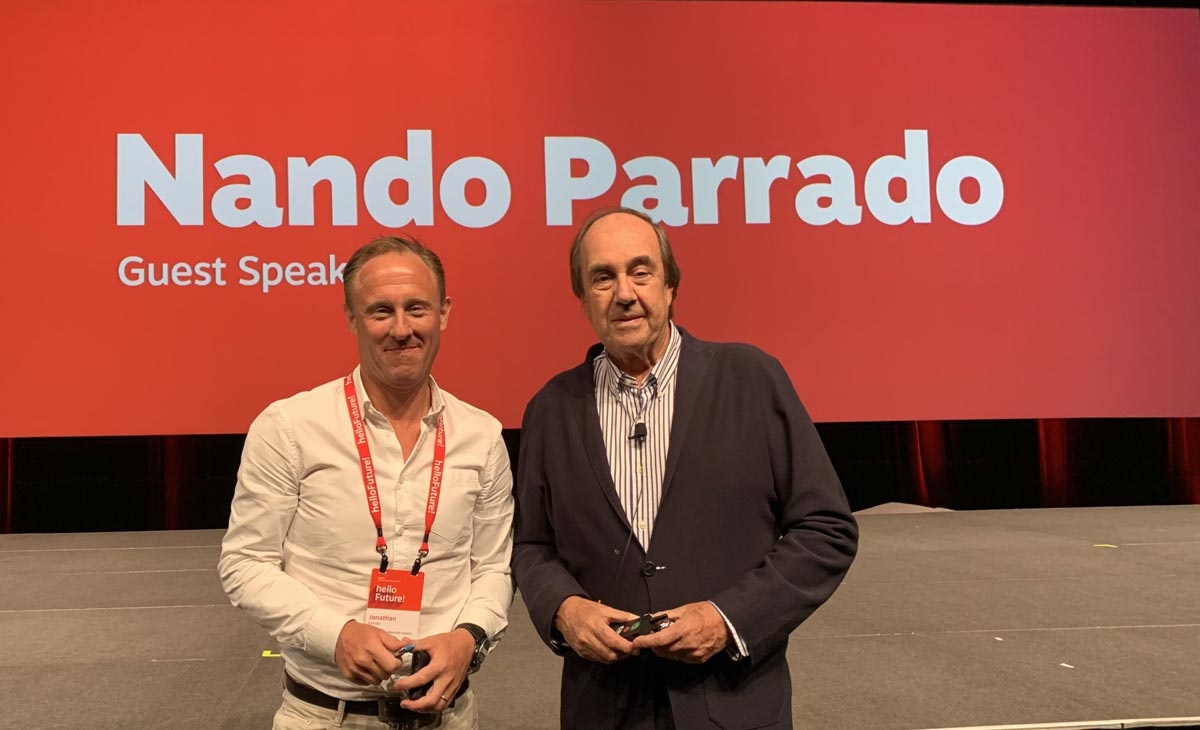 The World’s Greatest Ever Story of Survival

Very often in the life of a Speaker Agent you work with and meet speakers who are exceptional, with a genuine and a great story to tell. I travelled to Dallas, Texas to bring Uraguay’s Nando Parrado to 1,400 of Staples Store Managers.  Here is an insight into the conference, why Nando Parrado was the perfect speaker for this event followed by a short Q&A  with Nando where I asked him ‘the’ questions people want to ask but don’t!

This was a big conference on a huge scale by European standards, but normal for a US company with 30,000 employees and 1,400 Store Managers.

I have attended a lot of conferences and it’s rare to see such complete audience participation let alone genuine enthusiasm from a group this large. Mike Motz the new CEO of Staples Connect (45 days into the new job at this time) has been brought in to re-energize the Staples business. I am not able to divulge the details, they are private to Staples but they do point to the need for change;  reflected in shifts in Staples corporate values, its interaction with the community and refreshingly through investment in its people.

Most people know that the high street is struggling to keep up with changes in consumer behaviour led by the giants of eCommerce versus the expense of maintaining a bricks and mortar based business.  The leadership of Staples has made a bold decision to confront the challenge head-on, without delay by changing how they operate and rebranding as Staples Connect.

From what Nando and I heard from the Store Managers who we met, they hadn’t experienced or even seen anything so positive as this conference from their employers for at least the past 10 years. This was new, refreshing and surprised all.

Conferences like this Staples in Dallas event cost $ millions of dollars to organize. The return on the significant investment has to be well thought out. Between CEO Mike Motz and the CMO Marshall Warkentin who Nando and I enjoyed listening to, this conference was a bold decision of intent. The event was meticulously put together by Jane Shanab and her team at Spark Inc, based in Toronto.

The change followed this conference, effective immediately, Staples 30,000 employees discovered that they can now wear jeans and choose their own style of shoes. The new CEO has recognized the need to revitalize the brand but importantly has looked at those that can, and if empowered with greater responsibility, deliver more. By increasing the value placed on the employees and its customers, Staples believe this change will be reflected in success for all.

A Keynote on Change by Nando Parrado

Nando Parrado was flown from Montevideo in Uruguay to deliver the message of change to Staples employees: ‘You may have a challenge ahead, but none is insurmountable and I am going to tell you why.’

For those who don’t know of Nando or his story, he tells one of the world’s greatest ever stories of survival, courage, teamwork, decision making, risk and leadership’.

In 1972 Nando then 21 years old was flying from Montevideo with his rugby team to play against a team in Santiago, Chile. Onboard the plane with Nando was his mother, sister, the pilots and 40 of his best friends. The pilots made a fateful error in bad weather conditions turning the plane in the wrong direction and smashed it into the High Andes at 18,000ft.  What happened next is remarkable, impossible.

The aeroplane broke in the middle upon impact and the front of the plane slid 4,000ft before it came to an immediate stop.  Those in the rear of the plane from row 10 onwards died immediately upon the first impact. Nando was sat in row 9 and survived. (The first miracle) The plane landed on a 25-metre wide gap of snow between rocks at 18,000ft. Crashing left or right of this strip would have meant certain death. (The second miracle)

Temperatures outside were -30℃ below freezing. The 27 survivors had arrived wearing summer clothes, ill-equipped for what lay ahead.  Rescue experts looking for the plane gave them no more than 36 hours to survive.  At 14,000 ft search helicopters couldn’t reach them, and couldn’t find the plane as it was white in colour and blended in naturally with the snow-covered mountains.

Day after day, the situation became direr. On the tenth day, they were listening to a small radio playing at a local station. They heard the broadcaster announce that the search for them had been called off. It was now believed impossible that anyone would be found alive. Following the announcement, the newsreader then reverted to playing music.

What happens next defines Nando Parrado. He will tell the audience that he is ‘not a hero’ and that ‘anyone else faced with the same situation would have done the same thing’.

I am sorry Nando, I would love to think that I or anyone else would have taken the same courageous decision you took, but I can’t!

Having endured weeks of being in hell – described by Nando as ‘worse than being in Dante’s Inferno’. Nando lost his mother, his sister (only 17 years old) who died in his arms and half of his rugby team. This story that Nando tells is one of decision making, leadership, bravery, risk, teamwork at a level I don’t think anyone else has experienced.

Having survived for two months, when the whole world thought they were dead Nando Perrado together with his teammate Roberto Canessa completed a gruelling trek across the world’s most inhospitable mountain range and found help. They crossed glaciers and climbed without any equipment with only a sleeping bag made from the lining of the aeroplane. They trekked for over 60 kilometres for 10 days before finding civilization and the rescue.

Canessa who was almost dead went straight to the hospital. Nando went straight into the rescue helicopter wasting no time to point out where the plane was and collect the survivors. Fourteen others had survived due to the decision making and courage of Nando and Roberto.

Towards the end of Nando’s keynote, he plays a video containing beautiful images of his family that includes Nando as a young boy with his own parents, with backing music of ‘The Living Years’ by Mike and the Mechanics.  It’s a reminder of how much he has appreciated his entire life, cherishes his family and enjoys living in the present day.

“I am happy to be alive.” – Nando Parrado

….. and finally by way of a little humour. Nobody knew this, Nando was due to arrive a day earlier for the Dallas conference. Upon take off from Montevideo, whilst taxing along with the runway flying headed to Santiago (the same route as in 1972), with Nando overlooking the wing, the engine sputtered and then exploded.

The plane was forced to abandon the flight and return to the terminal. I asked Nando had this concerned him? The answer, “No, I also have my own private plane license and regularly fly single prop planes”

Nando Perrado exudes happiness. He lives for every day, for his family and his dogs. He is a highly successful businessman in Uruguay.

What further separates Nando from other speakers is his willingness to do more than just speak at conferences. From the initial briefing call, Nando makes the offer that the client can use him for additional meetings, media interviews and sponsors events.

Once Nando is on the ground at a conference he is at the client’s full disposal for the entire duration of his stay there. In our experience, we see many others will take the speaking fee and run to their next event. Nando Parrado is refreshingly accommodating.

Nando Parrado was the keynote speaker at the Staples US Store Managers Conference held at the Hotel Anatole in Dallas, Texas. Represented by Promotivate Speakers Agency. Enquire about booking Nando Parrado and check his availability here.

Of Interest – Other Recent Headline Talks and Speakers by Promotivate Speakers

Sir Ranulph Fiennes, described by the Guinness Book of World Records as the World’s Greatest Living Explorer, keynote at the .NEXT conference, Anaheim, California, May 2019.

Dr David Hanson, the world’s leading inventor of humanoid robots, including ‘Sophia’ address the <……> in the Dubai, UAE, April 2019